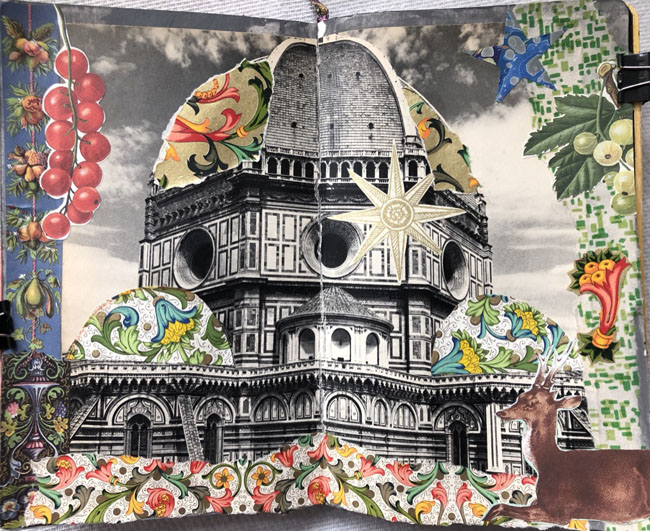 [Woke up with a strong intention to collage a valentine to a tiny lake inside the Adirondack Park blue line.  Beloved to my husband and I since the summer we were both 23 and discovered it together.  Then something in my deeper creative mind jacknifed the plan.  I guess you never forget your first love/sense of idyllic human completion.]

Although you've had millions of devoted admirers over the centuries I can only hope that all their sweetest memories of your charms remain as vivid and alluring as my own.  I shall never forget the first evening I spent in your embrace made fragrant by night blooming flowers.  I first caught sight of your beauty from a rooftop dining space alight with the day's Golden Hour as I'd never experienced it.  Seeing a sea of similarly incandescent terra cotta rooftops awash in the same glow my soul felt itself reach for your hand.  You seduced me simply and completely.

We literally stapled our passports to the inside of our underwear and then moved empty-handed into the night of a place we'd never been and were unafraid to explore.  We simply followed the sound of voices and lights.  We'd been in Italy for about a week after traveling on an Italian ship for eight days to reach Naples.  The experience had taught us where we'd see, learn and laugh the most - voices & lights were our password to Truth for that magical 6 week window's worth of time.  It never once steered us to a bad or frightening place.  Not even when we followed an increasingly massive roaring sound to the piazza surrounding your jewel of architectural renown.

We'd unwittingly followed the sound of rage and resounding large-scale mobilization straight into some type of political rally that packed humans tight.  The air shimmered with the sound of their collective voice raised as one united by uncompromising dissent. We turned as a single whirl of legs and arms.  Your night air caressing us.  Knowing not to run outright and draw attention to ourselves.  We walked brisking without a clue of what we were doing.  Only one of us, after some panic-stricken hissing, was able to recall the name of our hotel.  But she didn't know where it was located.

Directly in front of us were three stylishly dressed dark and handsome men three or four years older then we.  They at first were speaking ugently, all at once, in obvious group encouragement to arrive at the rally we were fleeing.  Then one of them saw us doing that and grabbed the arm of an another.  Without even a twitch of eye-contact consultation they pivoted towards us.

We must not be frightened.  It was only a communist rally.  They themselves were communists but clearly reasonable and nothing to fear.  Said in three languages before I picked up enough friench, and another girl leaned into some rusty german translating abilities to get from one end of the thought to the other.  They were the handsomest, suavest, most self-assured young men I'd ever met let alone spent time with.  Only these many years later do I realize how rare it is to want to spend time with men that fit such description.

Florence - you gave me the most romantic safely madcap night of my life then and one of its sweetest fleeting memories now.  All held within your embrace.  Under a sky I'd paint with a base of cobalt blue and then find union with a host of specially mixed indanthrone blue and purple-grey tones.  I don't know if there were stars and a moon.   I do know there was a long luxurious stroll across an ancient bridge that held the imprint of your centuries' human foot traffic.

For a while we six stood in a silent line and gazed at the far more famous bridge that crosses your Arno river.  It was a lovely moment in a timeless place.  At some point the spell broke and I remember us talking in two somewhat urgent groups of belated consultation. Where were we going?  It appeared neither group knew.

The gentlemen (for that's what they were...) weren't from this city but another they kept assuring us was of no importance.  Not in a forget you saw us way but simply reassuring us they lived nowhere we were obliged to visit as diligent tourists.  We laughed with a tentative willingness to proceed as a group intent on sharing the evening.

(because of this long ago gift you bestowed, my most magical Florence, I never ever question unlikely paradise instead of disaster within movies showing us make-believe lives practically nobody actually lives.)

We ate watermelon.  And they taught us a regional dialect word from their grandparent's generation for this sweet delicious fruit that I still remember.  We climbed a seeming eternity of stairs and years into the future I'd return here and literally facepalm to see how close we'd been to the Uffizi Gardens. Climbing and climbing it seemed like time out of space until something very real and big crashed directly in front of us.  It was a stag; close enough to rear back at the rank odor of his scent.  Coming from where to reach what destination?  It was impossible to know.  All of us were amazed in a way that left us gasping with laughter.  Kissing occurred.  And then the night sky erupted with dazzling white light.  Music familiar to our shared generation - no matter where we lived - followed only seconds later.

We climbed the final distance to the edge of Piazzale Michelangelo.   It was ablaze with a glare of strung lights.  Internationally popular music pulsed from the back of open cars ringing the outer curve of the wide Piazzale.  We ladies jumped and clapped and spun to grab whoever we'd been kissing.  The young men laughed as a single voice of triumphant youth about to have a good time.  The evening - although retrospectively chaste - had spun us all in a web of delighted willingness to say Yes to you and ourselves and each other  We danced for several hours.  Stopping to drink water and eat more watermelon.  Strolling the very edge of the curve - shouting out greetings to people in our age-tribe dressed all manner of ways with all manner of accents and languages.   To kiss while wordlessly conveying in an entirely mutual way that was all that would happen.

The walk back down the innumerable stairs didn't occur until daybreak.  Shoes in hands sticky with watermelon juice we marveled at all the terraced natural beauty we'd walked through with no awareness of how lovely and magical the night had actually been as it pulsed all around us.  Excitement erupted when the Stag's crashing after-trail was discovered.  We all stood still to stare at the proof of what we'd witnessed.  Just us and the stag.  Each of us turned slowly to search the landscape.  It was still impossible to guess where the stag had come from and where it was going.

And Florence.  I've never before told anyone ever about this night.  It was just too perfect to contain with mere words.

It still is.  That's why I added tiny hints of what it felt like using beautiful papers inspired by your own forever-beauty. ..

Wow. It was already pure magic when the stag appeared. A stag! Weren’t the three handsome men enough? Told with rich detail — sticky watermelon, staring from one bridge to another, the endless stairs. Lights and music. Kisses that somehow communicated a limit. Beautiful interactions between youth and an ancient city. Thank you for bringing it alive and sharing here.

Marti - you would have been right out there at the center of the piazzale dancing. It felt as if our bodies' movements were breathing literal life into the stone.

Dee - Three handsome men who weren't thoroughly obnoxious and full of themselves! In '75! What on earth were the odds of such a magical and miraculously safe Up All Night youthquake experience. It felt great to have as a private thing all these years but sharing the memory has really made it come alive for me, too.

(((Acey))) such a beautiful love story thank you for sharing!

(((Mo))) it was an amazing night and still among my favorite tribe gathering experiences.

the collage is an absolute wonder, the colorful modern bits rounding out the classic black and white architectural rendering ... the story even better, what I always imagined an idealize 70s Euro-adventure could be ... what a joy it must have been to revisit this memory, what joy you have given by sharing it here

Liz - I have always hoarded it because I didn't want it to lose its internal shine as special moment in my life. But now it is actually illuminated! I've been smiling on the inside ever since posting the Valentine - with a fully warmed heart and often smiling on the outside as well.

This was indeed am idealized Thing to Do come-true from that mid-70's stage in our mutual time curve. Peculiar to our age group, perhaps, I'm not sure. Everyone on the tour was a new high school or college graduate. One recently married couple who had both successfully defended their doctorates that spring. Our tour guide/chaperone was 26. And there were over two dozen of us, can you imagine???

Also my two roomates were Texans who'd roomed together in college in Austin. One still lives there. Every once in awhile we email. Never an exchange goes by without some retrospective sharing of these specific memories. Speculating about those guys and what became of them. Lots of laughter.