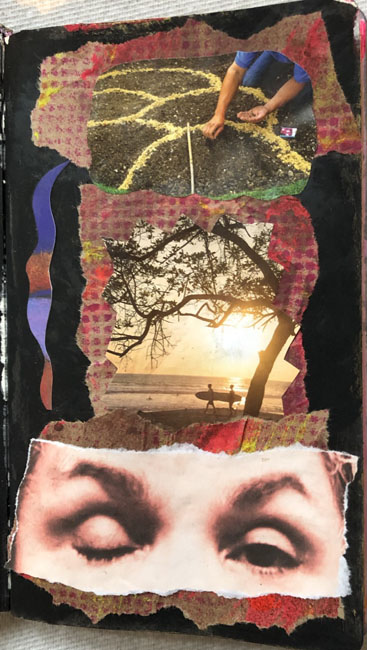 When I woke up this morning I knew the biggest challenge I could set myself was to do this prompt with human examples rather than personifying myself as flowers and birds.  Thought:  I probably don't even have enough pictures of relevant humans to find the images I need.

Subsequently came up to the studio and located everything necessary within fifteen minutes - including the time it took me to eat some yogurt and stare around at the paper-oriented chaos.   It's a good and thorough mess but the space hasn't recently felt as consistently alive and bouncing off its own walls as it has in these last few weeks.  I have all of you to thank for that.   The way each participant has moved deeper into themselves and their unique 'collage brain' has encouraged me to do the same.   That's not something I imagined happening and it's been an amazing gift to receive from your singular and combined creative energies.

I picked my Within card first because I'd set the image aside for something else I was going to do this morning.

has been clear to me for decades that my Yang side/animus is a surfer dude.  I carry him around in my solar plexus and he in turn carries me around in the outer world.  Like it's no big thing.  Just chillax, Acey ... we've got this.

(and, at a deeper level of belief system(s) - My life/spiritual philosophy strongly suggests that our most important inner Be-ing is the balancing nature of polarity. )

Above - as my highest self and also open vessel for Divine energy to fill as needed - I am a mindful and diligent sower of seeds.

Below - I am simply myself without adornment or shame.  Equal parts awake and dreaming.

From the earth I rose and to it I will return: equally awake and dreaming.

[J. took the Below picture two years ago.  Is kind of an underworld image here in the present tense so that's an unintentional layer of meaning for both the choice and expanded interpretation of 'below'.  I weighed forty pounds more and was fairly ill in an iatrogenic sense from very toxic immune-suppressant drugs I took for nearly four years.  The last thing I wanted was a picture of myself but I was taking the year long art journaling class and our technique for the month was stenciling.  We were supposed to take moody deliberately self-flattering selfies in high contrast lighting/clothing/hair situations and then make selfie-stencils for the theme of Re-birth.  This was the best I could muster.  And it's probably an accurate portrait of how I look/feel about our current world and whatever we do or do not "really" know about such things. ] 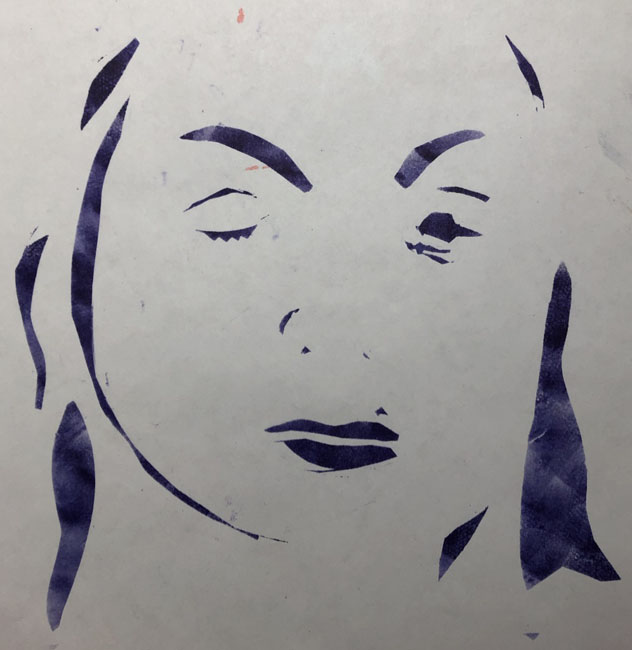 half dreaming and half awake.  I really don't know how to handle our planet's human-driven current events any other way.

Had to force myself. But am really glad I did because it's a good addition to the art journal where I built it a home.