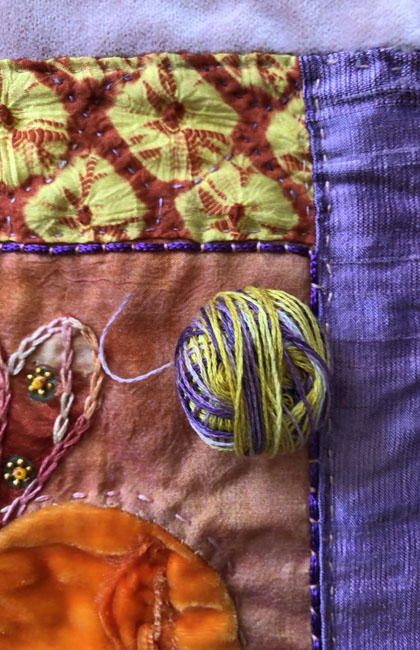 Yesterday I had the luxury of shifting my studio back to its usual frame.   Was good to do that and better still to see the results strewn across my coffee table workspace once I got this far today.  Am planning a few hours of same right now.  Then it's back outside to the field to continue clearing the existing garden and perhaps beginning to dig up clumps of spearmint and goldenrod right in the center.  In their place I'd like to create a sunflower house. Have never done that and this seems like a good year to see what it's like.  Both to successfully make it happen and also to step inside of it.  Feel like it would be a more organic/feral version of stepping into this little place. 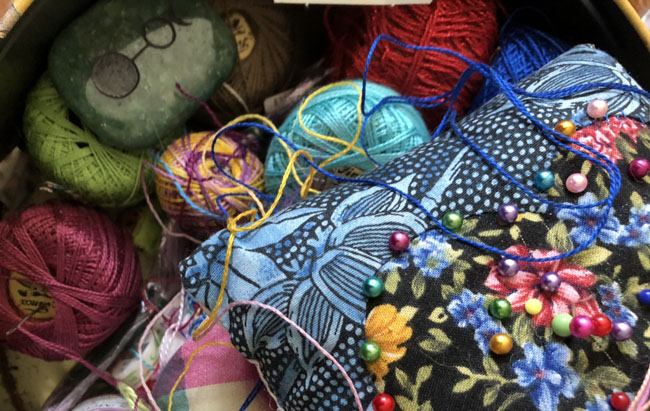 Have been thinking a lot lately about my friendship with jude and, more concretely, how satisfyingly deep and long-running it has been.  Have also been thinking about Flickr more generally and how I really loved everyone posting lots of close-up shots of sewing boxes etc.  And further thinking it's the thing I most miss about in-person sewing circles:  gawking across the table at other ladies' Things.  Asking questions and hearing backstories that draw everyone closer.  Making something that's in turn closer to the true nature of circling together. 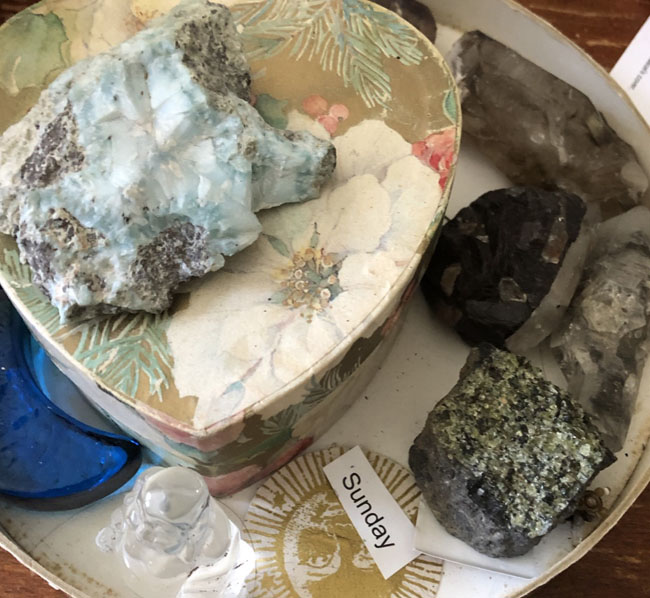 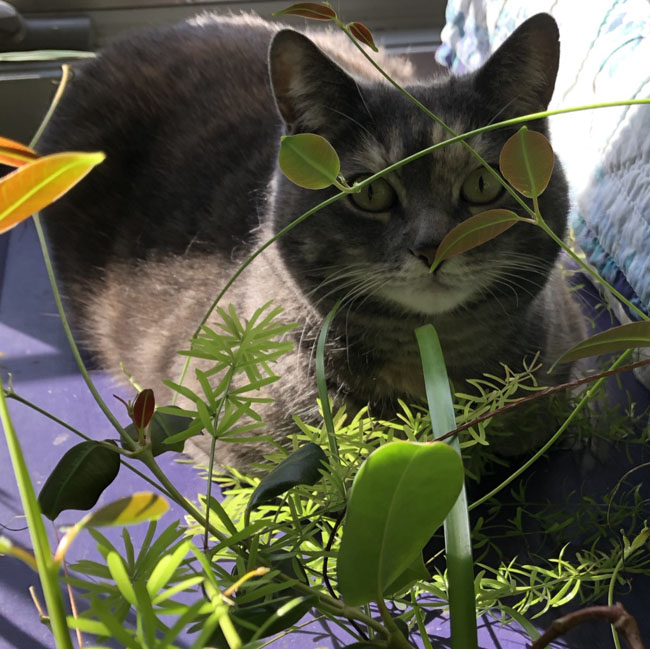 A lot of my studio time during the second half of this week felt like one long practical application of all the times I've stayed awake far too long running through various mental lists and scenarios related to emergency/disaster preparedness.   A lot of people I know in the walking around world started doing this as a feature rather than a bug after 9-11 or Katrina.  I've been doing it - with long offs and then painfully intense on cycles that feel like they'll never end - since an exceedingly boisterous fireman came to my 3rd grade class.  Grinning as wide as Dick Van Dyke he enthusiastically described all the things we must do to keep ourselves and our families safe in the event of a fire.

Fast forward to the now in which J. and I reflected on our past while taking a break from inventorying and collating/date-coding our amassed non-perishables.  I reminded him of whatever hurricane it was that roared all the way up the east coast when T. was quite young back in Boston.  We'd barely had enough extra money to get the duct tape we needed to put on our windows as per neighborhood watch request - plus extra ice for our battered cooler and a gallon of water each for the three of us.

We spoke of how many hundreds of millions of people are in that place now.

As far as leading with a kitty pic on Caturday - Mama detests the survival assemblage making havoc of the usual mudroom arrangement and she also had a little hissy fit knocking things over upon discovering there was also a lot of other stuff scattered  throughout the kitchen and hallway floors.  Obviously most or all of these full throttle irregular activities are by default a feline ordeal.  While I was taking her picture above I told her the story of everything we'd gathered especially for her.   To me her expressive gaze says: I don't care why or how I just want it to stop. 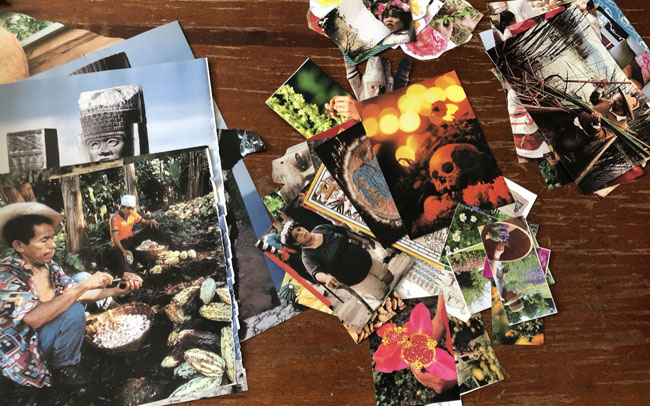 After partially digesting this morning's news cycle I felt a renewed need to rip apart and consolidate a few more text blocks and part of an old calendar. 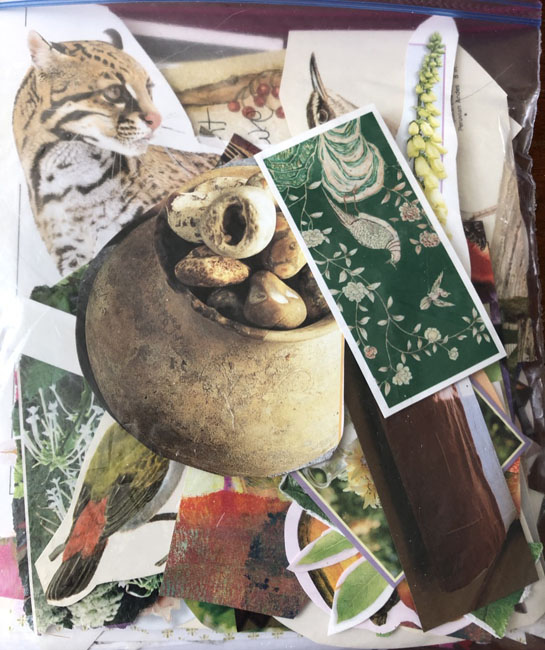 Tomorrow I'll start a new daily collage week with a greatly amplified stash baggie.   It will be a great thing to have all ripe and ready to go because if life keeps throwing us enormous things to be processed ASAP we'll all need to maintain a super reliable brainwave fulcrum.  Stitching and gluing pieces of paper to each other - plus hopefully maintaining my morning reading routine and yoga practice - may have to suffice in scattered pieces throughout the day.  "morning" pages in my writing journal may need to take a less expansive form depending on what any given morning brings.  In earlier portions of my life that were largely structured around the overlapping structures of my husband and son I embraced evening pages.  In the most maxed-out stretched thin portions of the past I've kept lists of Five Beautiful Things at the end of every week.   This eventually funneled into keeping an ongoing gratitude journal with morning and evening entries in the brief but hugely rewarding and clarifying method described by Angeles Arrien - more than likely within her book Living in Gratitude. 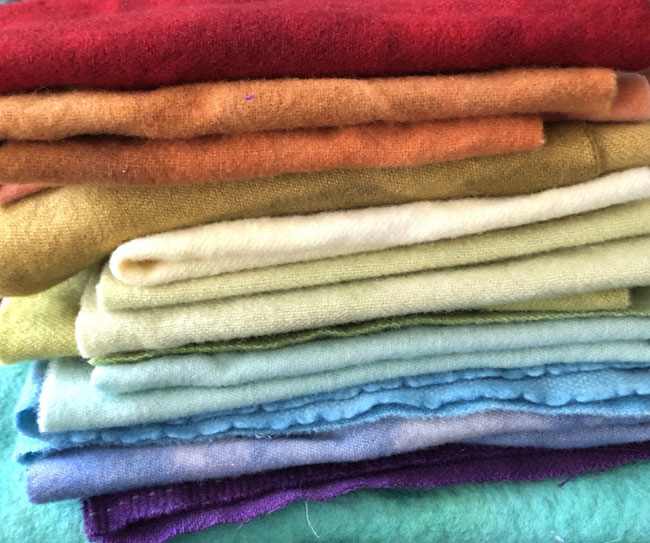 Also accomplished this morning:  folding up my strewn wool and wool felt collection and putting it away.  Before we got our catastrophe game plan mapped out and task lists divvied-up I was cleaning out a cloth-based storage drawer.  Whittling down and streamlining.  As I was examining the wool I understood I should make sure to savor the afternoon's slow and unpressurized pace.  Knew once J. got home from work our regularly scheduled Friday evening programming would be overwritten.  All the energy we didn't need to expend since we haven't been dealing with extreme winter weather or its aftermath (or J.'s mother having an anticipated but so far not-yet health crisis) kind of exploded out of both of us all at once just as I thought it would.  Have consciously chosen to live with the strewn pile as a sanity beacon/nurturing promise to myself: when everything has been as solidified as it can get for now I'll come back to this and relish the experience of colors and texture 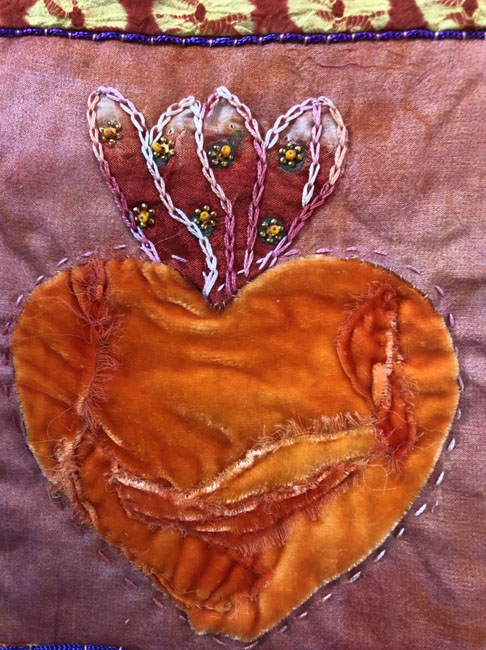 Within my storage drawer excavation I came across a stack of WISPs I'd thought were in a completely different place.  Am now hoping my indigo stash I was sure was in the drawer is actually located where I thought I'd stored the WISP's.  Remembered the above without recalling I'd layered raw-appliqued scraps of silk velvet to the base heart in order to give it some depth and texture.  Oftentimes when I re-connect with something still undone that I haven't seen in awhile I'm pleasantly surprised at how much farther along I am than I'd estimated from memory.  In this case I was shocked at how little I'd accomplished.  I thought this was ready to bind but it's nowhere close.

Practically a blank slate.  Due to the frail antique kimono scrap and the looser weave of the silk taffeta behind the heart I elected not to baste or pin into shape.  Consequently I will need to quasi-block the piece as you would a sweater only I'll use in the ditch quilting to ease the piece back into shape.  Have done this many many times and am confident of pulling it off  but it requires mindfulness and care, same as blocking a sweater.  This project will be a good foil for whatever the next week (or hour) will reveal in terms of both world wide crisis and one of the species' biggest ignorant mendacious assholes ever born being 'in charge' of this particular country and the condition/scope of it readiness/response.

Right now the big quilt feels too overwhelming as a stitching process.  Am quite near the end so it's not that.  It's a physical sense of being boxed-in right on the edge of claustrophobia by the size and physical weight of the quilt.  But it's comforting to have it one hand so for now I've spread it out on the couch for the classic hippie slipcover effect.  Only I did it specifically for the cat. The quilt is her comfort object and she is mine.   Just watching her blissful sleep posture warms my heart and evokes tenderness. 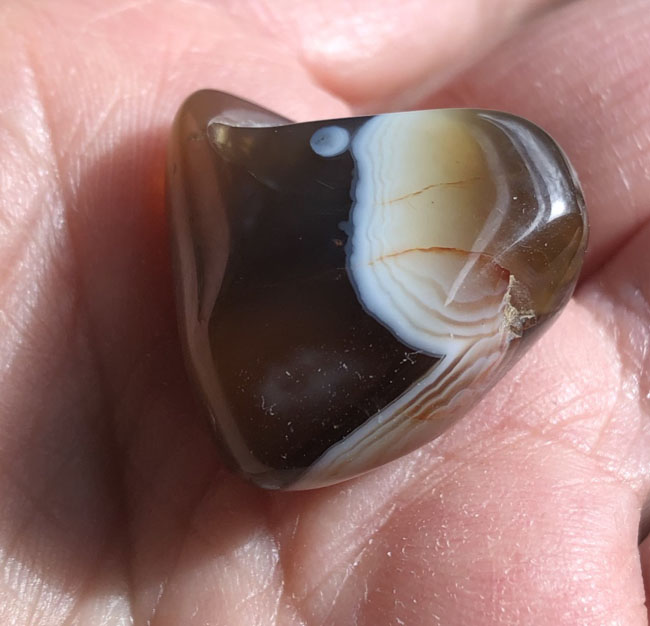 When not inventorying non-perishables, towels, sheets and first aid supplies - I've been inventorying my tarot card collection.  This process has led me to realize that I don't have many tarot decks (3) at all.  But I do have a number (11) of oracle decks.  Oracles of all kinds fascinate me.   While inventorying and whittling I found the above loitering with clear intent to be found just then. I love that the white "moon" has a slightly more opaque waxing crescent shape within the circle.

The first narcissus bud is fully emerged from the group's protective sheath.  So far there are ten emergent flower stalks.