Back on a later May morning when the freshly unfurling spring canopy of hardwoods looked like the image above  J and I took a gorgeous drive to pick up our last bread order of the winter share season.  As we drove I noticed something with the eagle eye of one who was raised to see and swiftly respond to certain visual cues.   High on that list would be:

I made happy noises and talked to myself for a good 15 seconds during which J kept driving.  My internal joy stemmed from having not very successfully resigned myself to a summer season devoid of treasure hunting due to the [potentially permanent] closing of our town's freecycle shack at the dump.  I rapidly understood that, deprived of seasonal yard sale clutter busting options, any box by the road might contain more interesting pickin's than the usual sad college era mugs and commensurate coasters.

Somebody, I swiftly concluded, had gotten hunker-buggy and been unable to stop themselves from getting rid of stuff they never use/really don't like once and for all.  My first peek in the closest corner of box seemed to confirm my hunch: I don't know what these keys were meant to decorate but as soon as I saw them I imagined them hanging right as they do above - on the southern corner of an enclosed space within the evolving sanctuary garden.  J really enjoys them.   We agree we wouldn't like them anywhere in the house.  But hanging from a post on a wire fence in the yard seems pretty close to perfect.

the wide shallow bowl below is (I think) 18 inches. But ... 'way before I got as far as seeing the keys or the above bowl I had the previous conglomeration of thoughts while J continued to drive until I suddenly found a collection of relatively cogent words. Hey!   There's stuff back there that I want!  Didn't you see it? I didn't actually know I wanted any of whatever was in the box but by this time strongly intuited it was likely.  My level of what he called 'imperious certainty' led J to conclude (and this was somewhat disconcerting for me to process after the fact) that we'd just passed a plant nursery of some kind.  What else [apparently. per my husband.] could possibly rouse me so?

I explained as briefly as possible.  Then he turned the car around while sharing the assumption I'd seen a nursery and couldn't just let us move on without stopping.   Is that what I'm normally like when we're out driving around in the non-pandemic reality??!?  To the point he'd think I'd also be that way withIN this reality????  The questions distracted me in a way that allowed me to keep the tightest lid possible on the ingrained Pearl-indoctrination that once you saw something FREE you had to be lightning fast before somebody else got to it first. 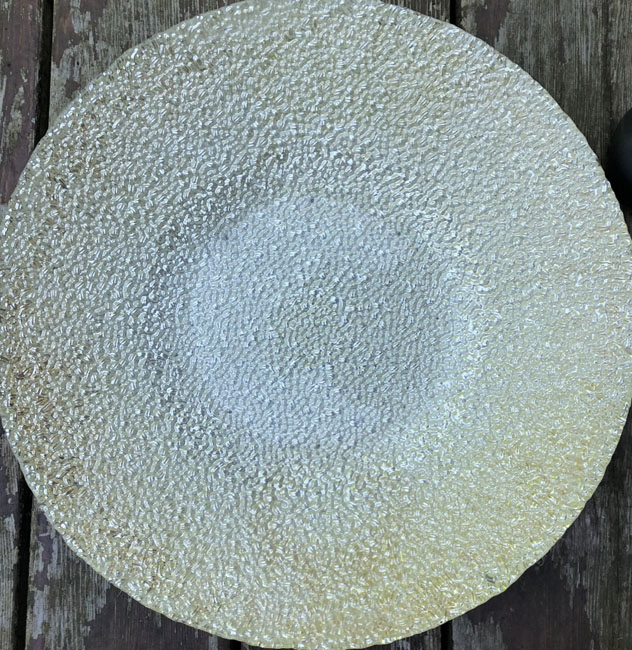 The first thing I saw beyond the keys was the bowl pictured inside and out above.  I thought, since I only touched it through gloves, and it was profoundly shiny in the bright morning sun, that it was metal rather than glass.  And my eye's mind saw holes drilled into parts of the edge and then attaching it somehow to the front of the potting shed.  Putting directly beneath it a birdbath and letting the blackberry canes I'd been planning to pull grow unchallenged all around it.  Hoping/intuiting this would keep the jays away from my tomatoes.

Alas it's undrillable.  This fact led to an awareness I intend to write about in more depth.  And from there  - all during the extended decontamination period we agreed mandatory because how do we know What Went On - I've had a series of increasingly impractical ideas of how to give this object a second life/designated purpose.  Followed by how to give it a single finite (but entirely appealing) purpose in another few days. 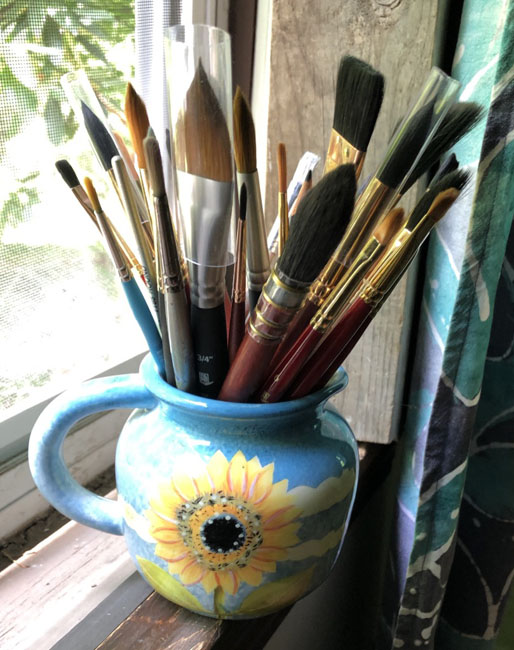 Also in the box - assorted glassware and the mug above.  Intuited it would be just right for holding my brushes here in the summer studio a/k/a our dining room.

Didn't forget about attaining this stuff but got put-off and overwhelmed when I realized the big metallic disc was actually a glass bowl so shallow only a set-dresser (or possibly the exact right kind of instagram influencer) could love it. We had so many other things going on, after all!  so I left the box lurking in our garage until J started making noises about everyone doing their part to clear away some of the [admittedly out of control] clutter out there.  Earlier this week I washed everything dishwasher safe on the extended sanitizing function.  And then considered my pandemic-induced free stuff with a greater measure of focus earlier today.

Understood straight along I'd use the not-my-style dish of some sort (at first I thought it was the lid of a particularly obnoxious butter dish) to hold stones and shells and crystals.  Had forgotten the simple enjoyment of arranging such display bowls.   And dallying among things brought to life by the addition of previously unknown things. This tableau will need some editing and additions but for today we're in prototype-land. 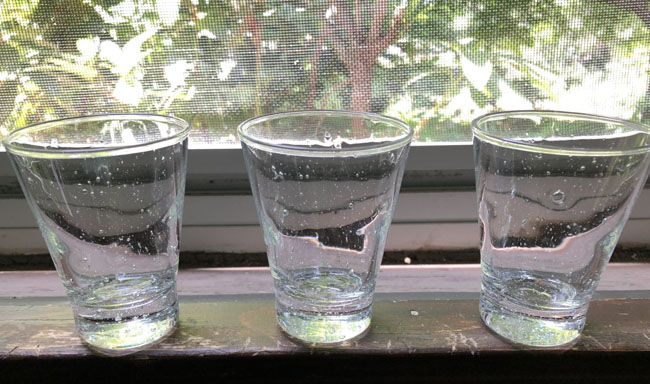 Because I have zero clue what was in style last year-  or five or six or eighteen years ago - I did not understand at first that these shot glasses have bubbles trapped in the glass. Prior to going through the washing machine  I thought the bubbles and blurs were evidence of a DIY event gone bad.  Think their actuality is somewhat appealing and almost magical in nature.  Because. Soon after I set them out to consider how I might transform them into miniature containers filled with even smaller things I began to spontaneously narrate deep in my brain.  Just looking at the glasses there on the windowsill gave me a viable section of new skeleton territory for The Novel. The specific scene I envisioned in a whole cloth way gave me a much deeper way-in to a character who has always existed among this crew but she was never previously given her own narrative voice or even a shimmer of POV status. 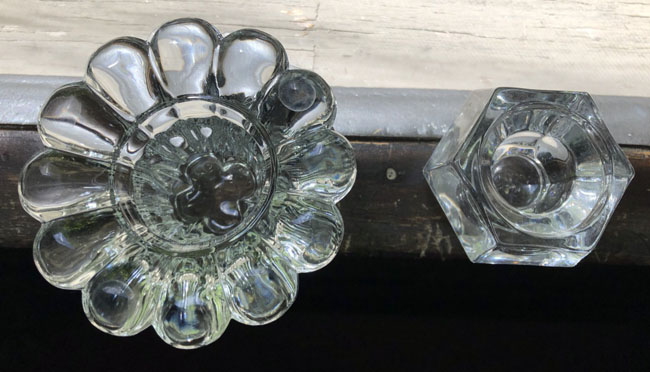 I thought to compare and contrast the flower-shaped candle holder (there was a pair in the box) with a different glass holder that actively reflects my personal taste and style preference.    I thought I could use one of the pair as a marking tool on my gelli plate.  While taking the pic I realized I could fill the other with sand/dirt/very small pebbles and use it as an incense holder. 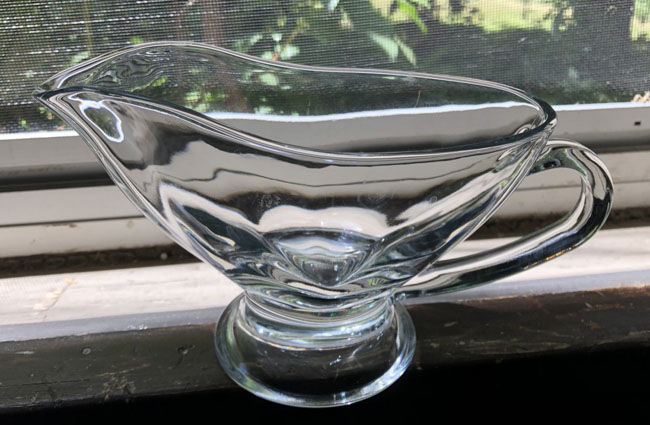 Have always loved gravy boats and if I were a completely different person I would have spent some period of time heretofore tra-la-la-ing my way around flea markets scooping up an entire lifetime in the making collection.  But I'm me and in that capacity have only three - each with strong family significance.    And now i have this one, too.  I like the lines of it a lot and am fully cognizant it may be a vase.  In which case for me it will always be thought of as the gravy boat vase.

Today I studied it just as it appears.  And asked it aloud what it might like to become.  And then actively imagined it replying

think of me as a vessel of cosmic good will.

I mean, sure.  Why not?  And I can't think of anything that personifies 'cosmic goodwill' more eloquently than a cluster of amethyst crystal clusters.   What comes next for this combo remains unclear. The blue dish above has a peak old Nana vibe for me.  I mean that in terms of Pearl and her friends and my adoption of Emrie's name for grace as a collective name for them.  Between now and the autumn season of ancestors I'm going to collect small notations concerning details I recall from the women who set the tone as I grew into my teenage years.  Then some type of ceremony I might be right on the brink of visualizing somewhat cogently.

guess this is just my as upbeat as possible way of welcoming myself to our collective new third world summertime. think we already know it's gonna be a challenge of noise and happenstance. 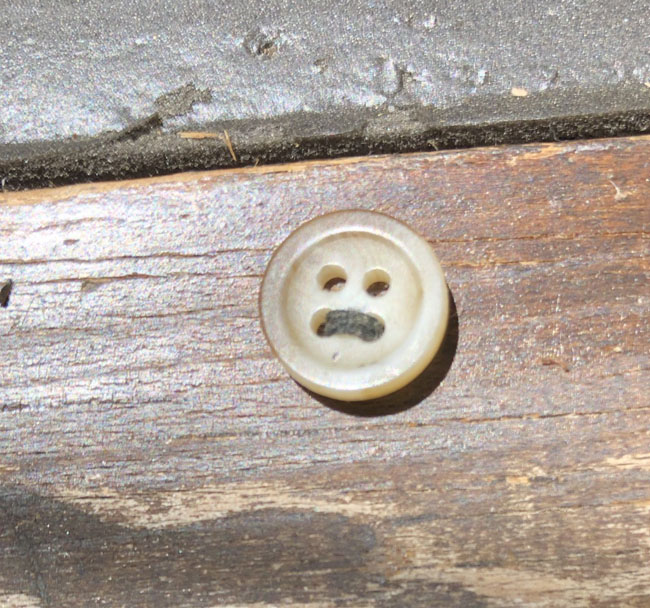 from chaos to cosmos Usually I post pictures of the little stream behind my home on my main blog.  There, I've been making a somewhat interrupted project out of tracing all the water-ways it joins.  Here, I'm sharing the images because it's a little trippy as well as light soaked.  That's how life has felt especially in our garden spaces and my studio.

Posted at 02:13 AM in creative practice & process, figuring out what matters most, fitting pieces together, raw materials, sustainability and substance | Permalink | Comments (0)