and the sun said: orange you going to challenge yourself? 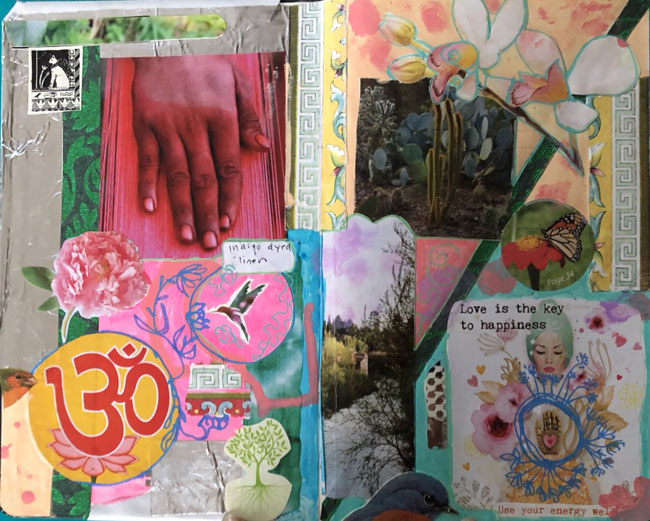 So okay.  Yesterday right before darkness fell the sun's light emerged ever so briefly in it's reflected sunset form.  The sky was mostly payne's gray in a variety of iterations and many many layers of naples yellow.  I looked at the yellow light and said to myself "I should 'do' the inspiration/muse/creative flow part of the sacral center by way of also doing something creative every day that is playful and intuitive and in which I do no thinking and maximum flowing."

because I do really want to re-develop that kind of routine daily re-balancing factor.  With harshened weather my life is all words now - spoken, texted, emailed, written, deleted, re-framed.  all words all the time isn't actually creative after a while.

Day #1 was yesterday in which I manifested the colorful background and over-doodles. The basic collaging was done over time and more of it than I care to reveal.  I just kept not finding the time to grab my box of paint pens and highlighters. Felt unable to get it done.  Realized I'd  grown unfamiliar with/unable to trust creative flow happening anywhere but the keyboard.  And then I thought maybe it's because it would seem more appealing if I thought of it as playing it done.  and thus it was.

I also decided I'm going to see this year out with as little toxicity as possible.  That's how I rang it in and within my personal intent that's the spirit in which the collage challenge found its community and 30 days of doing whatever.  So I will post about it - maybe not every day but doubled up like this one - or whatever - when possible. 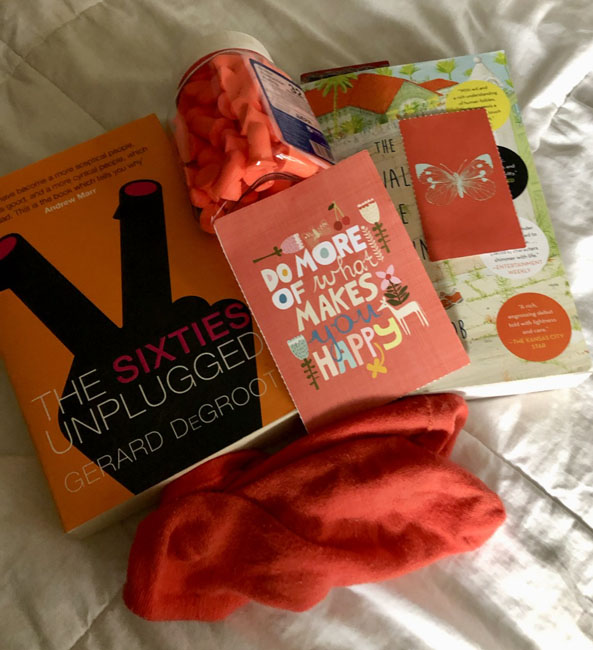 When I got out of bed this morning I decided I'd walk around in our house and 'collect' orange in some informal still lives.  Started right then and there in the bedroom.  Socks, earplugs (side-eye), two cards from my gratitude jar.  A book about the 60's written by somebody who sees nothing about life/geo-politics the way I do and thus I got myself this book several years ago to read diligently as a way of cranking my mind a few degrees closer to openess.

it remains unread.  I often look at it and then sit on the edge of the bed and remember the day I bought it on a wonderful jaunt up to New Hampshire with Jim.  I love the way the orange spine looks against the pale blue color of my nightstand.  But that's prime real estate - those two modest shelves by my bedside. 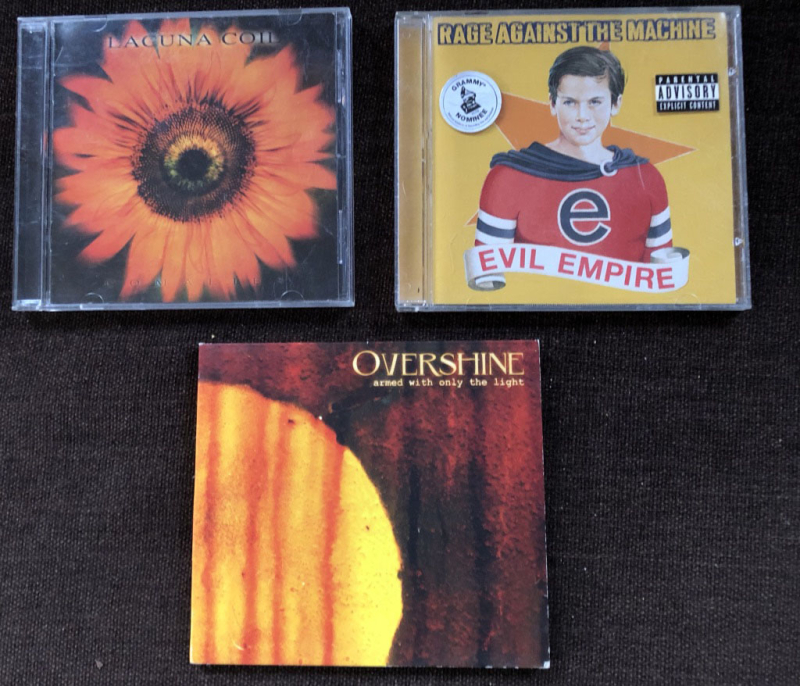 Beyond medication bottles of my son's - this is all the orange in our living room. 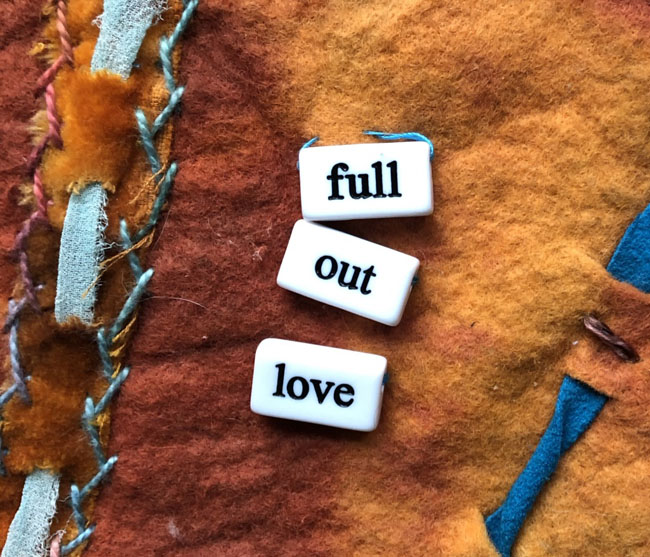 bypassed the kitchen in order to get up in the studio before Mama changed her mind and wanted to go out again first.  Don't think there's any orange beyond the tupperware bowl.

The studio has its share of orange although I'm not used to picking it out quite so rapidly with my eye.   i was quickly overwhelmed at the thought of what would be a matter of amassing rather than gathering.  So I stuck with photographing a piece I really love and just recently discovered somewhere not at all where I imagined it to be: it's something I made in jude's second iteration of a basic and beyond weaving workshop.

When I signed up she told me it would change my life.  I saw it change many peoples' creative chops and output on a regular basis.  Amazing stuff.  I think I myself produced two amazing things in that workshop.  The one above illustrates The Thing I got out of the ongoing seminar that truly has changed my love as well as life.

i freakin' LOVE attached weaving to the point where I very rarely don't include it in something that's surface design oriented.  so my next post will be a life/work/review closer examination of this project.  I realize I've shared it before.  Any time I rediscover it I just have to. invite others to do the same. 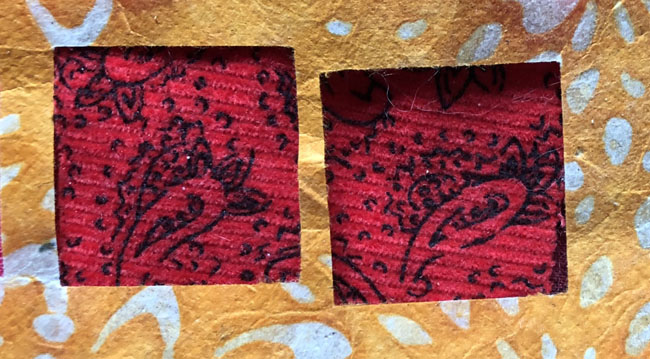 I spied the paper scrap on the floor last night and wondered what the punched-out squares could frame.    Will be using these two pieces to do a little sympathetic magic over the next week or so in a very specific way you may wish to adapt for yourself.

earlier it was snowing.  nothing to speak of but snow nonetheless...

orange frames red ... and that triggered a thought ... radiant

ah the orangeness of the womb chakra, the colour that I would just sort of skip past whilst meditating when I was younger, going from straight from the deep passion of red up to the golden will of the solar plexus.... until I had my womb surgically removed which opened up the space within for creativity.

oh I always think of this as the creativity chakra same as I consider the 'mother' phase of the female life cycle to be about far more than bearing/raising children.

I've heard other women say something similar about 'opening up space within' for creative regeneration within the newly opened space. Think it's especially beautiful to examine the results.

Oh Liz - I was positive I had responded to your comment but I must have neglected to publish it. "radiant" is a thoroughly awesome way of describing such a frame!