Home Archives Profile Subscribe
this is all VERY watery ...
reeling in and gentling down 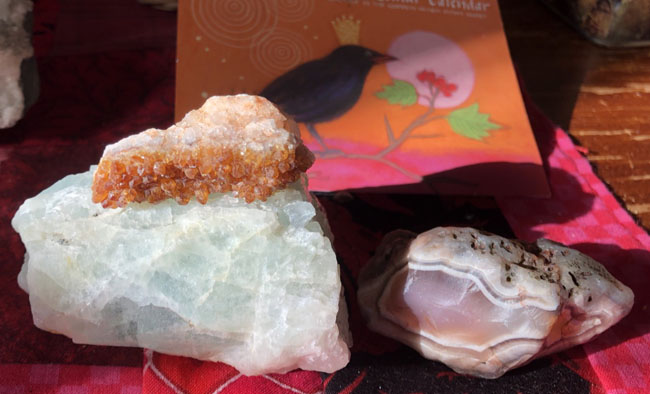 First of all I'd like to encourage everyone who's participating in this colorific look at who we are to take a visit to Mo's blog.  She posted a one of a kind/deep-healing response to a comment I made to her.  Mo's a very original and intensely gifted artist who puts profound sensitivity in all her creations.  I visit her blog knowing I'll be nourished as well as inspired.  But this one  - well, it blew me out of the water and deep into aquamarine territory. 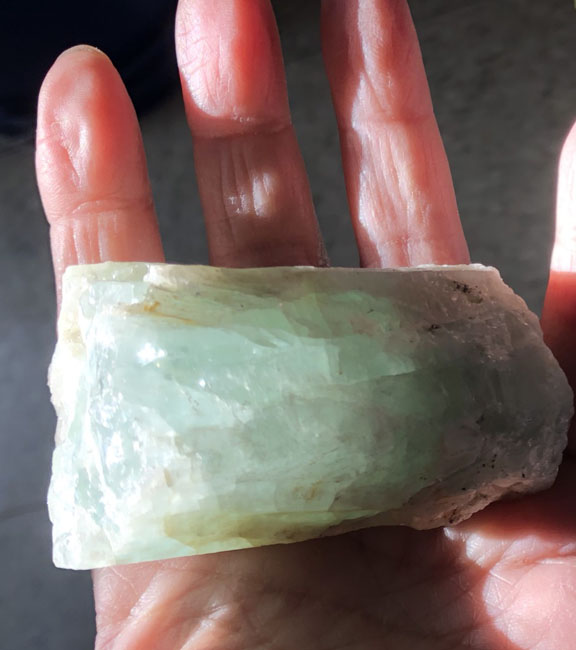 Aquamarine is sort of a no-brainer as a balancing stone for this chakra.  It's got a very limitless oceanic feeling to it that's strongly connected to long-distance communication through vibration.  I'm aware many energetically-minded people use this stone as a way of communicating with their pets (especially cats - or maybe it's just cat-people who are most inclined to do this?) in a long-distance way that involves vibrational channels below the oceanic floor.  I thought the first person who told me was relaying a strictly individualized experience.  But then it kept recurring so I became intriqued at a more collective level.

When my beloved kitty companion Celeste got too old and tired to follow me around absolutely everywhere I carried a small polished chip in my pocket to help her flow with the shift in our togetherness.  Had thought she was kind of on her last legs when I started doing this but she determinedly soldiered on for another year and a half.  When my family buried her ashes a few months back, within the center of a little memorial plot in the field garden, I included that chip. 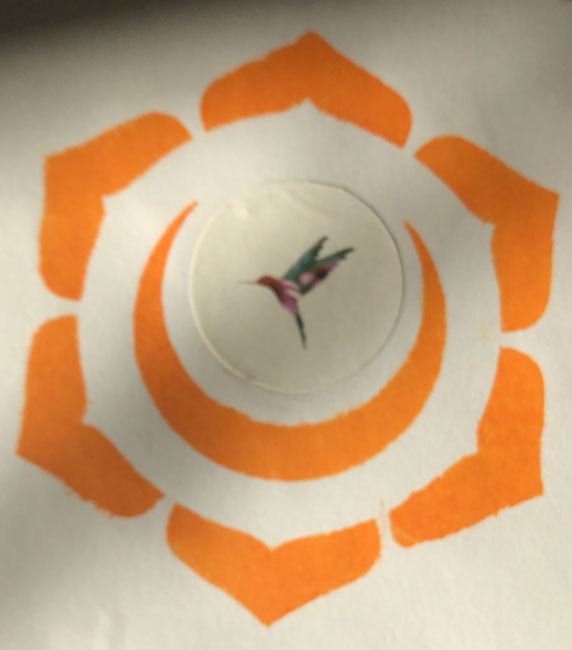 I have a set of chakra stencils.  In my various art journals I often work with shifting energy via the stencils.  In this case I revisited a page that didn't contain much beyond the basic orange stencil design.  I added the heart-chakra looking hummingbird (it's from Avena Botanicals packaging so I very much doubt that's a coincidence) when I realized I was consciously and willingly losing far too much mental health real estate to a particular atrocity of the past four years:

And by the time I thought to modulate the level of energy I was putting into this matter I was pretty uncomfortable internally.   Which means I was vibing in a largely silent seething manner that was making others uncomfortable as well.   When it comes to social justice matters I generally don't particularly care about that kind of thing.  But in this case I did.  Everyone I knew felt some level of the same things I was (and continue to be) feeling.  They also didn't necessarily have the you're-soaking-in-it deep bone fluency with emotional overwhelm that water signs have no choice but to develop because if not the results put a whole new frame on the phrase sink or swim.

This is an exercise that can work more generally for those feeling LOTS of feelings equally or it could represent something particular. For those who just can't get close to themselves in this way it could instead represent a desire to promote healing emotionally at a collective level. 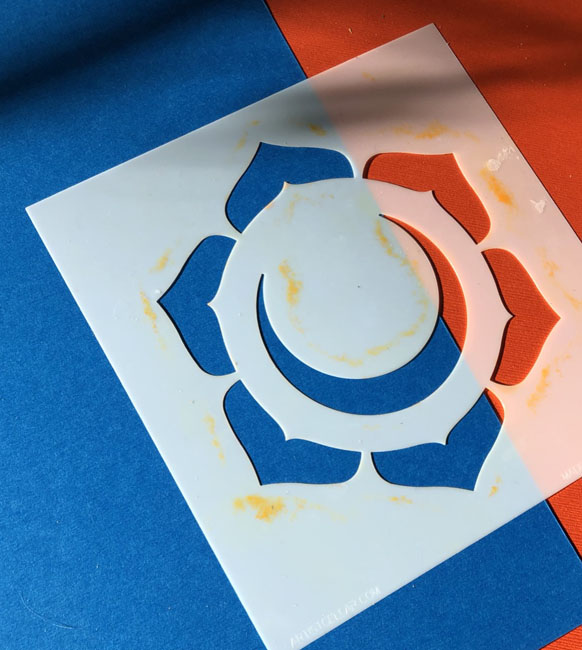 Two days ago, when I first thought of this exercise, it was more mechanical than energetic.  That's because I've been sick.  It began right as we shifted from red and orange and for the first 8 hours or so I thought it was covid.  If we weren't doing this thing I would have written that I feared it was covid.  As it was I just waited for my body to clarify what was going on one way or the other.  Going through all the uncomfortable and energy-draining aspects of a 'regular' seasonal virus isn't  anywhere close to feeling like the pain in the ass it usually seems.  I'm grateful.  Maybe twice-over because I'm actively feeling that gratitude. 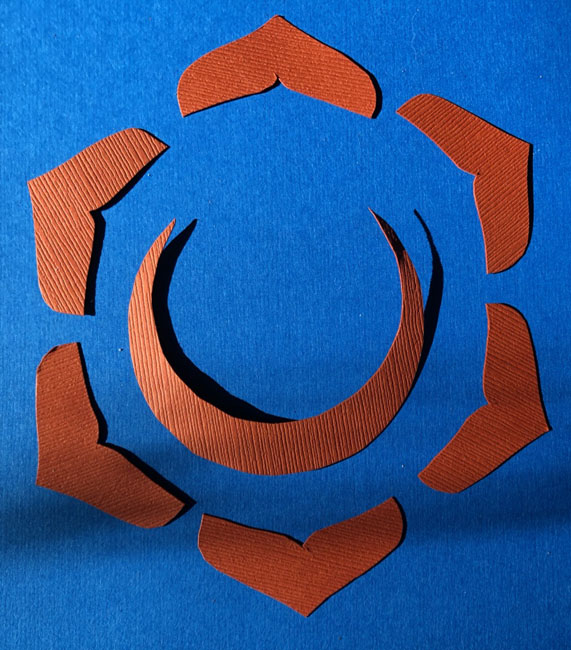 We need to make more space within our minds, hearts, and various forms of a body.  We also need to want to do that.  But it's very difficult to do when our emotional field is either going haywire on far too regular a basis or we have ourselves so buttoned down that there's nowhere for the "good" emotions to grow themselves.

I chose to use my stencil because I'm still sick although thankfully today my fever has broken.  I cut out the pieces two days ago when I was still needing five hours naps around the clock.  If you have access to a printer the easiest option is to find a second chakra line drawing you like here online and then print it out.  The physical size of your choice will determine whether you go back online to find something larger/smaller to your liking or simply use the print-out to color the symbol's components in some fashion.  You could also embroider orange on blue if you're trying to dry up emotional excess.

But what if you've already shut down because you aren't elementally related to water and thus can more easily detach from whatever you feel in order to get on with your life as you wish to lead it.  This often involves pursuing "happiness" by way of distraction from UNhappiness.   Even water signs need to shut it down from time to time but that speaks more the next chakra than this one.

If you feel out of touch with your emotions either because you're over-compartmentalized, actively intellectualizing your emotions, or simply aren't an emotional person by nature  you might be better suited to making the background/calling field orange rather than blue and the symbol's elements orange.

If you don't have a printer you can simply draw and cut out the two elements you need - a crescent moon and a single lotus petal sized so six will fit around the circle.

Pro-tip:  You may find, as I did, that it's a bit fiddly to get the lotus petals placed.  I used the fiddliness as a metaphor for getting my emotions aligned with my intention to balance and illuminate this chakra center. 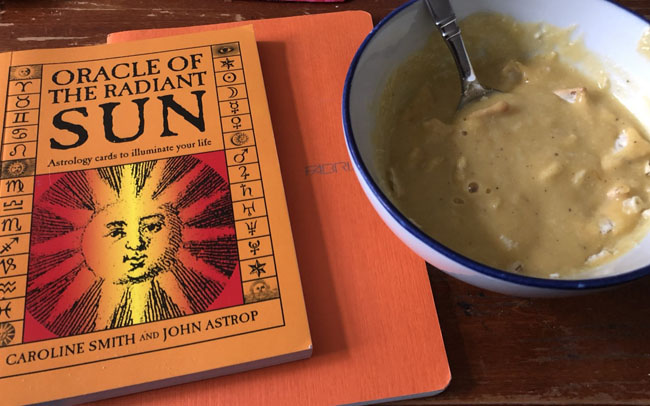 This is my third experience with some kind of group-oriented chakra work.  And the first in which people aren't congregating in the 3-d sense.  The difference has caught me offguard although I'm beginning to understand it a bit.  I think it's because I'm responding to everything as an individual rather than responding to individuals as the person in charge of keeping everything together for everyone else.  I just have to do my part and expand outward into the energy of everyone participating.  Making an orange watery flow together.

I like this life.  I think I'll keep it.

not sure how i want to work this. What's present, is Shadow....the self pleasing, self serving, sexually driven nature...the Janis Joplin self that walked full on into Orange and lived there till it Crashed, Big Time. I can't tell a lot of that story because a lot of it is not mine alone. But i want to look at it
some because dream self has been bringing the drama back for a long time now and i want to
come to know
the options a 75 yr old woman has... to....come to terms.
and also, what is interesting to me, a lot, is how you can just close your eyes and move through
this entire chakra...continue on. But then face the fact that in one way or another or maybe
both, things will be missing. And as i write that, maybe it's a mission of retrieval too.
Love all that you are bringing to this. Thank You

thanks for all of this dear grace. I am struck by the crucial difference our 12 year age separation is in terms of Back Then. I saw so much through the eyes of a bemused babysitter. Something's more guarded and way more cynical about bliss-following in a lot of the younger boomers. As Dee put it so eloquently - the difference between woodstock and take back the night. For me it's about reaching a point of sexual agency at a time when the bright heated orange absolutely every place slid backwards into a very different kind of shadow. Rock and Roll pedophila was an ingrained thing by then and seen through the backwards lens of conferring a legit badge of honor. Even more darkly-- if you look at the timelines of recent disclosures in 3-d world the younger group came of age right when people like the guy who refuses to concede, Epstein et all were first getting started.

A lot of that's been hitting. Memories of sleazy encounters seemingly everywhere. And the encouragement to laugh it off - be young and have some fun.

I see that and feel it in all the pictures of an Epstein nature. (part one my personal response to yours)

Part Two - how do you at your age come to terms.

I picture you - specifically grace - finding a place or places where you can quietly leave one of your prayer ties for each Thing. And say your words. I am a 75 year old woman coming to terms with --- whatever.

don't worry about how it's to be accomplished so you feel it there in your sacrum and throughout the energy column. just tell your land and everything Else. Here I am. I am coming to terms. and then see what happens...?

i navigated all those years well while orange. What i refer to is when i was 49. and much
darker. and yes. the Trump energy is a relentless trigger. and that lasted almost 10 yrs.
I think that's what i have been/am doing...on this Place of Land, but not so
specificaly, so directly.

(((Mo))) may the divine light of the collective shine ever-brighter