thank you for your patience 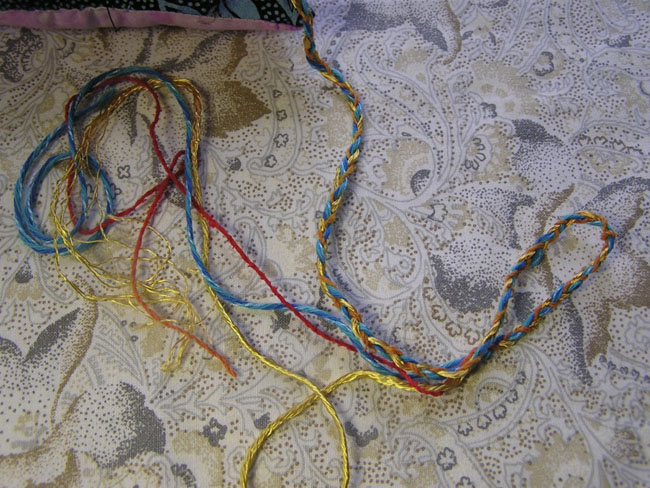 Here's a concrete prompt.  As we had it planned - I was going to begin introducing them on what turned out to crazytrain incited mob day because if I keep learning one thing over and over again it's that timing is everything.  The original prompts didn't allow for what I or anyone else was likely to feel like after such an event being what it actually was, and all.

Find three braid-able threads, cloth, or paper - or something else entirely.  Make the three elements you select relatively comparable at the organic working level.  One of the elements - or all of them - is obviously going to be yellow.

the picture I'm using as illustration of the prompt isn't whatever I'll make in response to it.  It's from a series of pictures I was editing hoping something would strike me somehow, beyond editing images for posts in the future tense

So I'll share my own effort when I make/complete it.

If you use all yellow:  think about integrating different aspects of the solar center's receptivity and projection that have been most meaningful and of use over the past 3 weeks.

Consider your completed braid of personal experience with the various ways you've related to your third chakra in its personal volition context.  How have you felt yourself trading energies with compatible energy centers/yellow energy more abstractly?  Think about:  moments of joy, self-determination, manifested creativity, humor, volition/leadership in the wake of solar's shadow of rage.

In terms of your own anger as you feel it needs to be interwoven or as you may have joined with others to form a crucible in which that emotion is elevated to action-orientation - Think about the sacred shadow principle and RADIANT rage.

manifest elevation as a visual cue.

If braiding large amounts of yellow feels overwhelming and/or too de-hydrating, try adding a little (or a lot...) of deep purple to balance and restore your energetic sense of Self.

another idea is to braid-up ways the madness has caused you to not recognize your own thoughts or actions.   In my case I'm thinking of this in terms of the inability have hold and maintain either component of expressive sentience. So I'm considering a mini-braid within a braid.  And some of the yellow - the thing that switched the flick, as on of the dive captains likes to put it - being as close to the yellow of Amanda Gorman's coat as I have on hand.

Here's a long-planned yellow listen only version of Sly and the Family Stone wanna take you higher to move you along through stuff  and take it ALL higher as you braid.

my teen-aged self used to be obsessed with braiding, making long cords with no discernible function