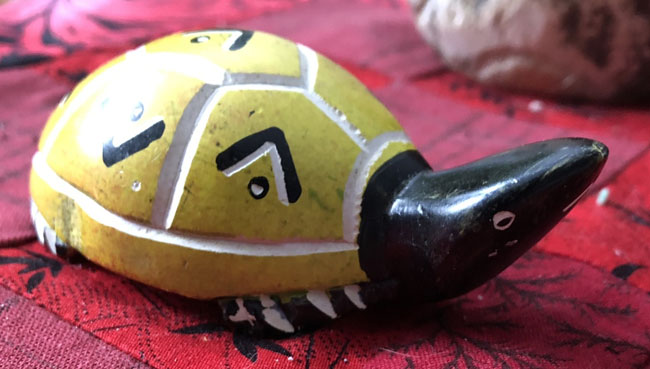 Although my intentions and gathering of ideas was right on schedule, I found that once January began everything slowed down internally.  My solar center wanted to solarize and simply sit in sunlight when it existed.  A lot of the time it didn't.   So I made the most of the times when it did. 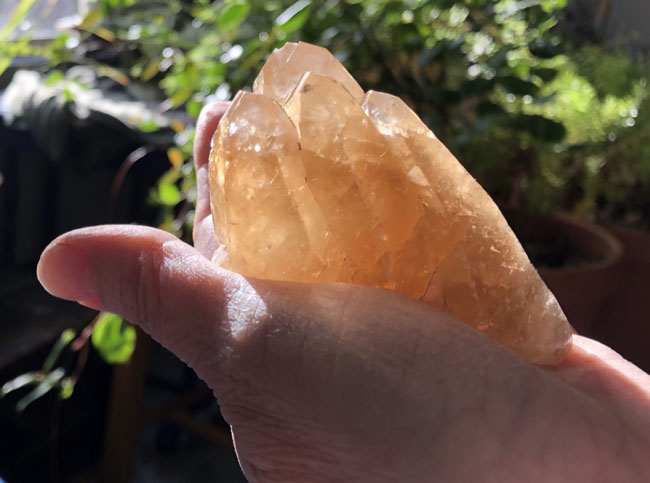 Yesterday, while all 3-d hell was breaking lose but I didn't yet realize that, I was in a fairly deep trancelike time-out four of sword space pondering light as it mixed with a variety of color rays.  Lacelady mentioned her fondness for yellow calcite and that set me on the search for this beautiful example I inherited from my mother.  Her rock-hounding moniker was Calcite Lil.  This is one of the few calcite pieces I've kept.  Most I gave as keepsakes to those who knew her by that name and would treasure the memory. 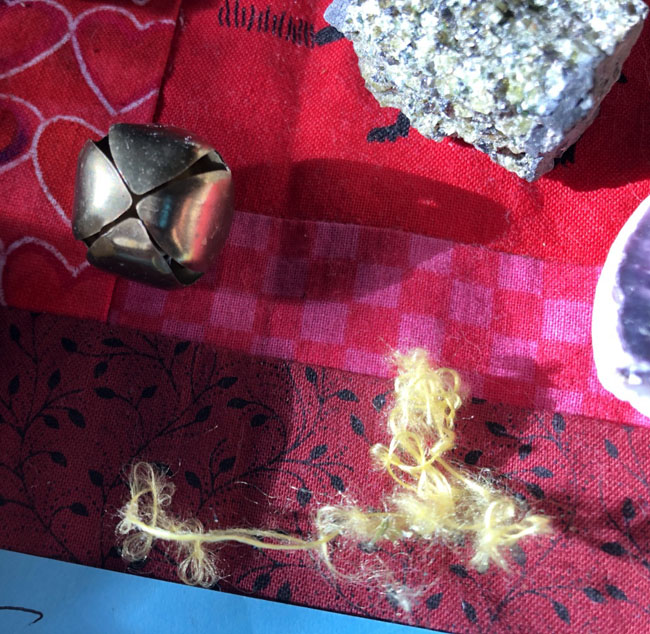 [yellow silk shedding from my Primary Nest project.  am collecting to couch into place somewhere in the yellow sections.]

Two things that came to light yesterday about yellow:  I realized that this first week has felt slow and/or subterranean because I've been conscious I wanted to review the seat of solar energy as I experience it by venturing back around in my physical body/emotional memories connected to the late 30's period of time when I wasn't aware of who I was to myself.  I wanted to see what's different now - at that deep internal level.  I came away with something I always come away with:

Menopause brought me into balance with myself - so that I understand with sharp clarity who I am and am okay enough about whatever that means on any given day to feel confident in that okay-ness.

Periodically I realize this and then kind of shrug it aside.  I feel like that's what I'm supposed to do now that it's not a new thing any more.  Who knows.  Before this month officially began one of my friends told me she was reading Wheels of Light to get ready.  I grabbed my copy to see what I might find for my own edification.  I found this - I guess it's an affirmation?  or just an insight I had - marking the page for the third chakra chapter of the book.

bad handwriting translation:  Facing the truths I already know makes my body lighter.  I am no longer holding in something I think will break me apart if I don't.  I wanted to keep this front and center in my mind especially once I tuned into the external world and felt my body instinctively want to EMbody my emotions.  Working with too much yellow energy can be soothed with deep purple. 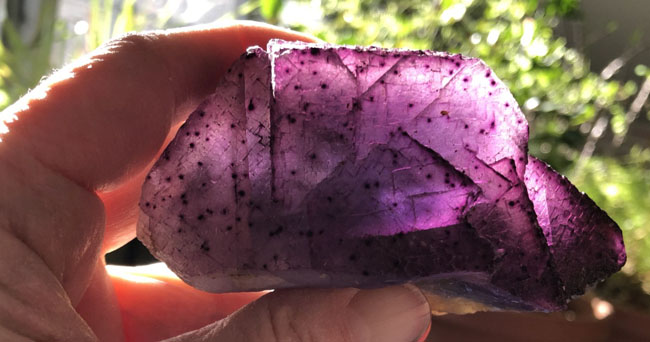 This special piece of flourite - one of the first things I collected as a personal choice rather than inheritance and gift stones & crystals - is very deep, quite dark purple unless it's in front of sunlight.  I'd gotten it out primarily so it would be charged and awake for the vision center.  But then I wanted to hold it.  Flourite is a mind/spiritual clarity stone and a great companion for the time-out energy of the four of swords vibe... 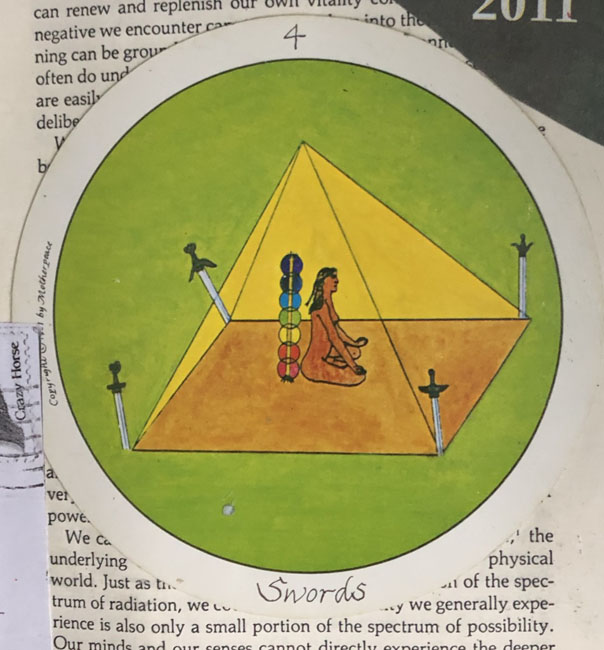 ...In order to bring what the mind yields within that space back into the more pragmatic mind of integrating the blissed out re-charge experience with something more worldly and action driven.  I wanted to exercise volition and forward movement.  All week I've put off getting into Yellow in the studio because I wanted a certain cloth for the coffee table.  An auspicious gift that's gained a lot of layers of personal meaning since I've had it.  And then yesterday I just wanted to GET ON WITH IT. 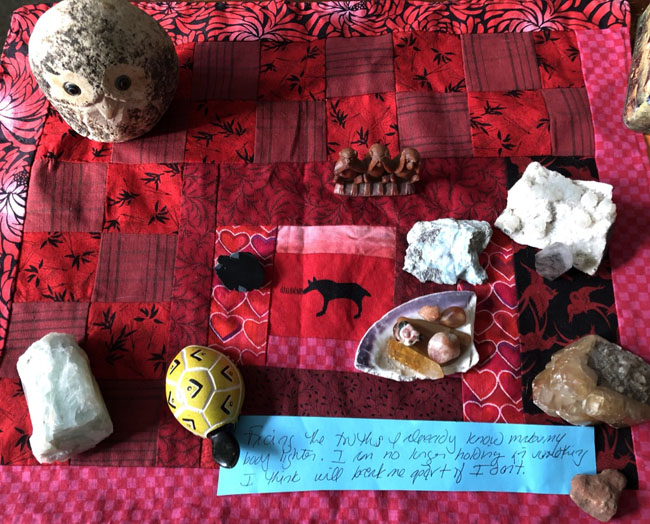 And so I cleared and cleaned space.   allowed the stones to guide me. 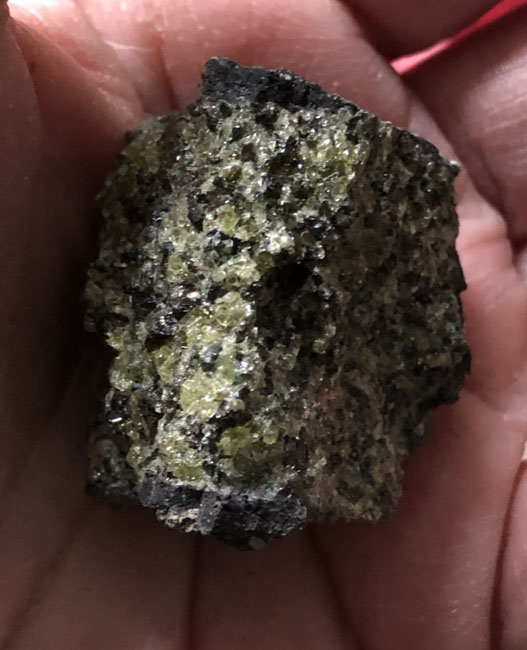 Looking back at the collective timeline of yesterday - it feels kind of marvelous that the whole time I really needed to be holding a strong personal healing ally with strong grounding, protection and heart-centered affinities - I was walking around with this chunk of raw peridot. It's a gem & mineral show specimen I purchased with birthday money as a child. 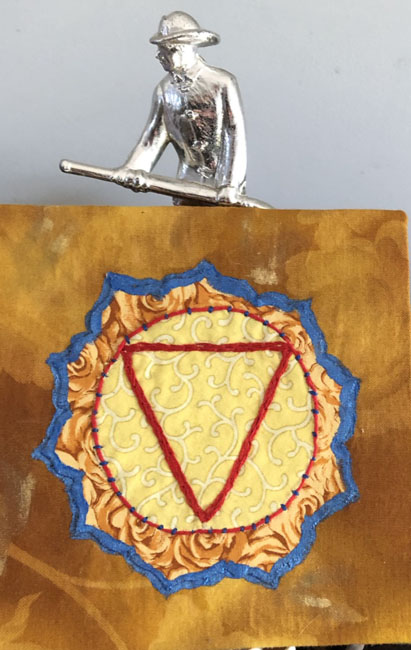 I gave the Emperor card of my slow-moving tarot deck mock-ups to Volition and the symbol for the third chakra.  I put the card on my artist's altar and propped it up against my first writing award - a grammar school slogan-winning contest for the fire department's safety awareness program.  I have no idea what it was anymore but the little statue's been important to me.  When I took the picture I liked the way the fireman was well-positioned should any solar fire eruptions shoot too high. Today was different.  More muted although I was still determined not to drown in noise. My sense of what that meant was more lenient today because I wanted more information to go with my jumbled sense of things.  Also it freaked me out I had emails from people urging me to share my thoughts.  This was before I had any thoughts - I had feelings and apprehensions expressed in words.  Not quite the same thing.

(i still don't have any thoughts.  Did notice I'm pushing most of my own emotions up to the heart level and that's an achey breaky place to be.  better than numbness.  Maybe that will become something of a ongoing reminder/prayer. 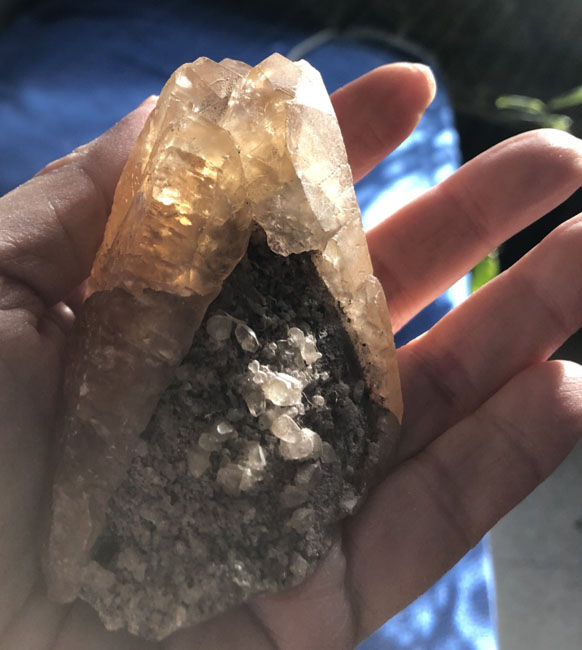 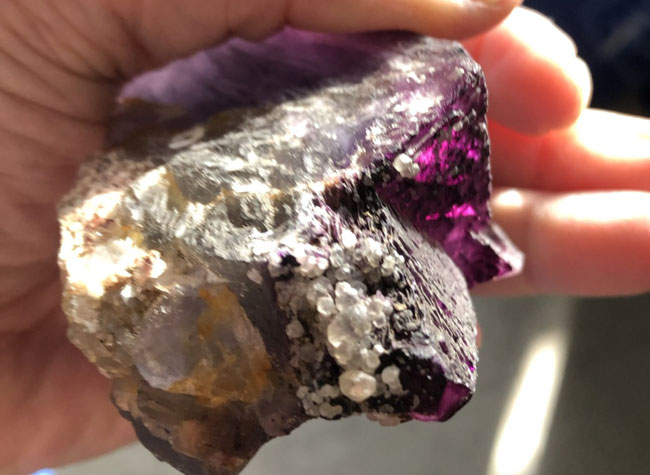 I took these two pics this morning because I thought it was cool that both the pieces had clusters of small crystals. 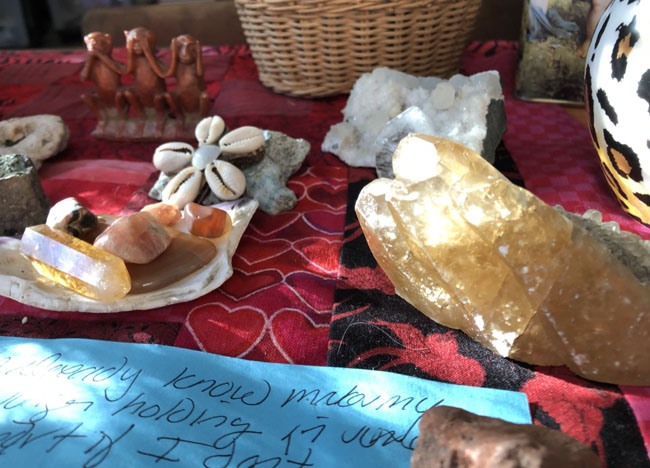 Much sitting in the sun staring into space today.  A little painting.  Mostly the staring and while it was not at all what I imagined when I set the intention to do more of it - the quietness and steady solar absorption was very good healing energy.  I was and remain grateful I had the grace and luxury of such a day.  Periodically I'd rendezvous with J who has been having trouble unplugging.  Like me, he couldn't really settle in the creative sense to either express or re-channel.

we are both awestruck by how young those women are - the ones who got the ballots secured.

the two of them so much braver than the seditious mob...