prompt: where does your heart rest? 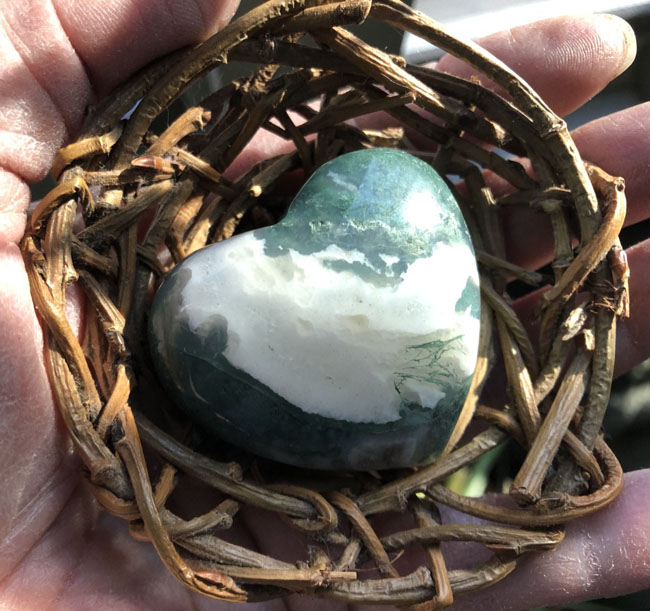 Visualize, create, or repurpose a container that's a suitable resting place for your heart.  You can leave it empty until you need it or keep a representational heart in the container at all times as a visual reminder that hearts are only as secure and vibrant as their resting space.

I've been working with a tiny willow basket a friend made me years and years ago - ever since I had a really bad day in which it was clear I was not holding the right energy to post on my main blog.  Since then the basket has been holding a moss agate heart.  I've been keeping it on my chakra-related stonework altar in the corner of my studio coffee table workspace.  It's incorrect to say this prompt is inspired by what sent me so far from center.  It was inspired in a way that feels more accurate to say - it was woven - by a few people who read what I wrote and had a purely heart-based response.  And in my own heart and intuitive sense of energetic wonderland, I felt that weaving happening inside of me as well as externally.

It was an incredible thing.  There were other things connected to a few local people and people who emailed or otherwise contacted me privately.  But that energetically woven basket created by simple words on a screen really knocked me out.  So far, it's my biggest single takeaway from Heart Month. At some point in the fairly recent past I came as close to having my heart hit the ground as I've come in - ever, quite frankly.  It's a different kind of thing - losing Heart throughout your consciousness.  It's nothing, for instance, like clinical depression- or any lesser kind of 'giving up' that I've experienced or observed.  Losing heart is beyond terrible.  It's, more or less, The End.

Sensing my heart dwindle with heaviness and shadows, I caught myself thinking of all the times I've rallied other women having a very hard time finding enough heart to hold all that hearts must.  A lot of times it's been intensely personal, as was/is my situation.  Even more frequently it's more collective.  For instance, the day after the '06 elections, I called a group of a my female friends, one at a time, who are (a) established leaders of some kind  (b) hypersensitive plant geeks and (c) close enough to the NYC area that they already had a rough idea of what was coming at us on a scale (i'm sorry but it has to be said since it's so freakin' true ...) the likes of which nobody had seen before.

During those calls, I shared a quote that's nearly always given Cheyenne attribution.  I only shared the first sentence:  a nation is not conquered until the hearts of its women are on the ground.  I talked to seven friends that day and I left five quotes on voice mails along with the assertion that we were needed more than ever.  I know this because I wrote about it in a journal entry I do not remember making.

Later, when the voice mail women began to unbend and recuperate enough to respond, I couldn't remember making any of the calls, either. The car accident that dinged my brain had happened.  It took one particularly fiesty NYC-for-lifer INSISTING that i had in fact left her a voice mail before I began to remember doing so as if it all happened in shadows and underwater.

When I recently felt my heart cruising about six inches above the ground, I mentioned it on my main blog because I knew I'd need to step away in order to heal somehow.   A couple of people were moved to leave a comment or they sent me an email.  I conceived of this prompt at that time.   My sense of the spontaneous heart-centered energy's pure love was enormously sustaining emotionally and also at a inner-screen visual level.  I saw a nest structure very similar to the tiny basket featured in this post.  But it was big and sturdy enough to hold me.  Inside there were feathers and flowers and sumptuous sprigs of many protective and healing herbs.

I rested there, as need be, throughout my time of regeneration. 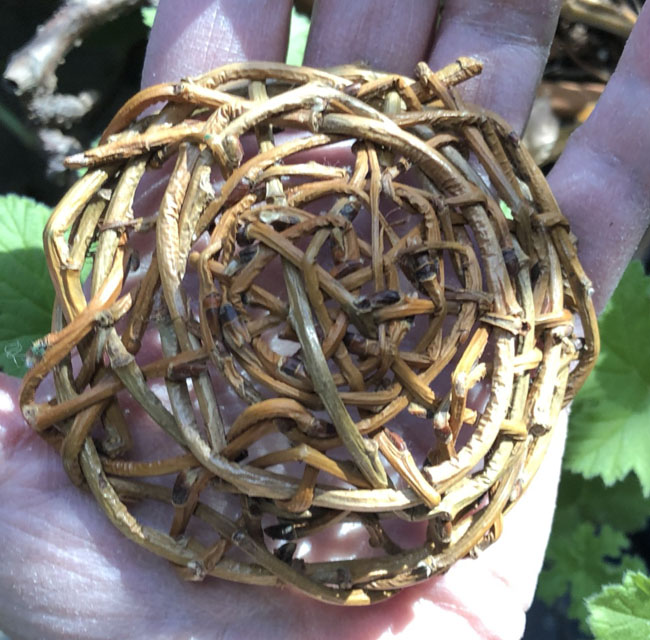 I made the The Stole of Bandaged Heart back in 2011 when I first met Jude Hill's magic circle at Spirit Cloth, here's the link if you want to take a squizz
https://itscrowtime.wordpress.com/crows-art-magic-2011-16/the-bandaged-hearts/

Okay, this one got me.

I have missed so much of what happens here of late. My loss. The basket/nest is such a beautiful representation of the net of women who buoy each other (and maybe more) in times of heart lows. You are such a good story teller.

Cheryl - there is no "just' about it.

Mo - ms. jude's responsible for so much heartwork created all around the globe.

Roars - talkin' to your cancerian mid-heaven. it's waking up more, yeah?

Dee - I figure you show up when there's something here for you to work with that will be directly relate-able, somehow. It's taken me a long time to get good at telling stories. For entire decades I was hugely preoccupied with how much people laughed appreciatively, rather than leading from the heart.

I went looking for my torn and tattered heart shell ... which dates to my very earliest days with Jude at Spirit Cloth and then traveled to Australia to be a part of Mo's exhibit "I dream of a world where love is the answer" ... I had intended it to be a gift to Mo, but she knew somehow that it was meant to circle the world and return home

what goes unsaid in that post, but remains with me to this day, is that my mom so very often made me feel that I wasn't good enough ... even when I was trying my hardest to be perfect, she would then find fault with my perfectionism ... not good enough, not good enough ...

Liz - your post stirred many thoughts and memories. You work with such great care and skill. And the feeling I have from all your posts and what they share is your great happiness to-make. To be making an then share the wonderful, perfectly executed results. I rejoice that you retained that and allowed yourself to build upon it over time.

Your heart shell - and it's place on your relationship to community as well as your consciously rooted, focus on family meaning and memories - is a very wonderful piece of creative work on so many levels.

so many daughters have internalized that 'memo' in so many different ways from their mothers. I'm often struck by how the areas of wounding often relate quite strongly to something we seek out, or learn about, at a later time -- such as you finding jude/community and soon after creating the shell.

my heart is not resting right now...?won't rest? is on the Move
only still for moments at a time

think maybe it's already in the car - with Tay? understanding what it needs. "rest" is the road. nomadland re-lit that flame of self-knowing ??...??