Over the weekend I realized I'd break the silence of grief's rawest aspects with this particular post.  I feel a personal need to preface it by saying my mother in law is the third most private person I know.  The only two who I'd judge to be even more so are her eldest son and her baby boy, who everyone here knows as my husband.

That said.  I'm not going to tell any of the stories that J and I have been trading back and forth since I last appeared in an electronic form.  I'm going to tell a magic story that would not exist without an ongoing seed.

in this case the seed is money.  The context is my tarot card collection.

At a certain point her life, when she was just around the age I am now, Mom commenced sending me money for my birthday.  Early into the habit she made a point of telling me she hoped I'd use it to buy something she wouldn't approve of.  My mind went immediately to tarot cards. 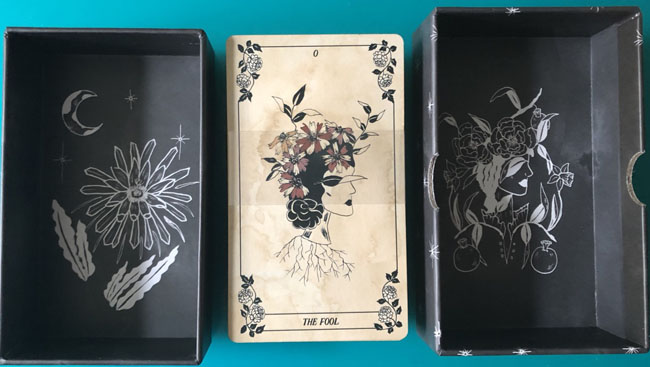 After awhile, my ongoing ceremony of selecting decks that really spoke to me came to a T-square kind of crossroad.  People started gifting me with decks that spoke to them of me, specifically.  They were nearly always plant-related.  hmmmm.

It was weird to me, to receive gifts from people that were offered as tokens of esteem as well as special, and generally quite enduring, affection - up until the point in time when I lost so much ongoing human contact through people gone to the virus that I saw everything much differently.

feeling weird or not wanting to shift perspective

and a mighty weird one at that

if it's you're ongoing response-reaction

to somebody offering you a token of honor well-laced with love.

I decided the shifted perspective meant my old one

shouldn't be hard to lose.

what if I just sank into it?

Since then I've also been immersed in honoring my intuitive streak

since it's so wide

and we've been traveling through the house of intuition's elevated form of Light/Vision.

i woke up on Sunday morning

and was guided with some of the strongest here-after life force from a departed human that I've felt in my life.

I sat down at my laptop.  I typed 'indie botanical tarot decks' in my search bar  and wound up at a pinterest site and from there a graphic artist's personal website and the deck above.

it's part of a thematic and energetic trilogy from gardener and artist Nicole Rallis.  I felt our departed matriarch's presence calling me by a family/real life nickname that sounds/means nothing like 'Acey'

this is exactly what I had in mind, she told me.  Get all three because this is my final gift to you.

but it was the Maiden deck that pulled me in with Light's speed for a secret reason as well as the most obvious of all: 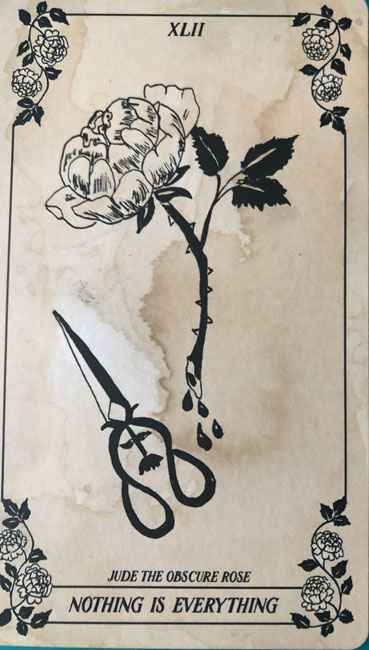 When I first held the box my hands warmed considerably.  When I took out the deck it was as if I'd had it awhile.  So I just automatically started shuffling as if that were true.   Shuffling hand-to-hand with my eyes closed.  What is right now about? Holding them awhile to ask the same question.

then pulling the above card.

We find ourselves clung to a key to fulfillment, yet we must observe a collection of things, each of which part of the things that will fill.  This Rose appears as a singular event, a bounty worth counting as value well-Spent.  But Jude the Obscure obsesses on an absence of something, costing it the benefit of the craving and the crush.

So okay.  a hot deck in my hands, for sure.  This always gives me a sense of homecoming.  Add to which, bringing it back around to the Sixth Chakra - it's pretty hard to get any more Sixth-ish than this.

I spent a long time sitting with the deck in relation to my secret reason that was understood and facilitated from Beyond. Then I went back and methodically looked through to pick out first my soul and life card 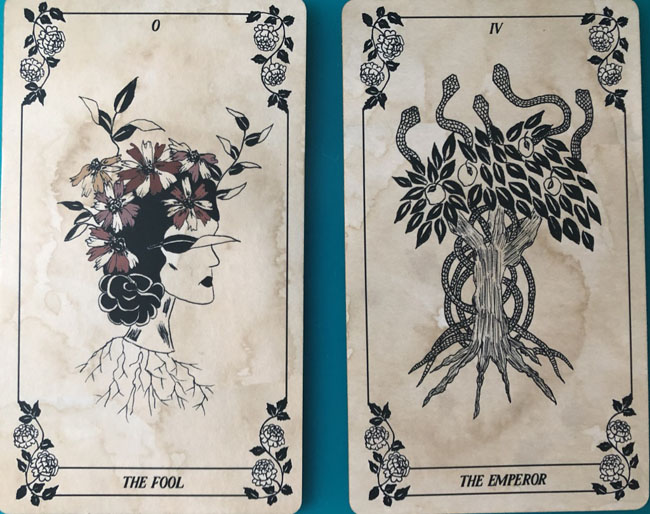 And then my favorites at a blink level 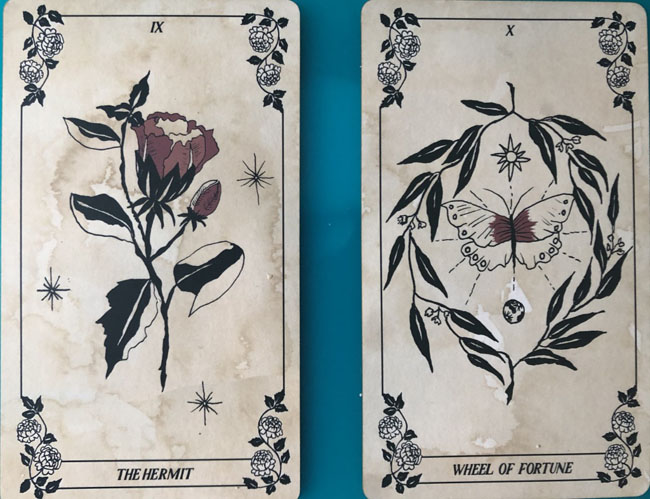 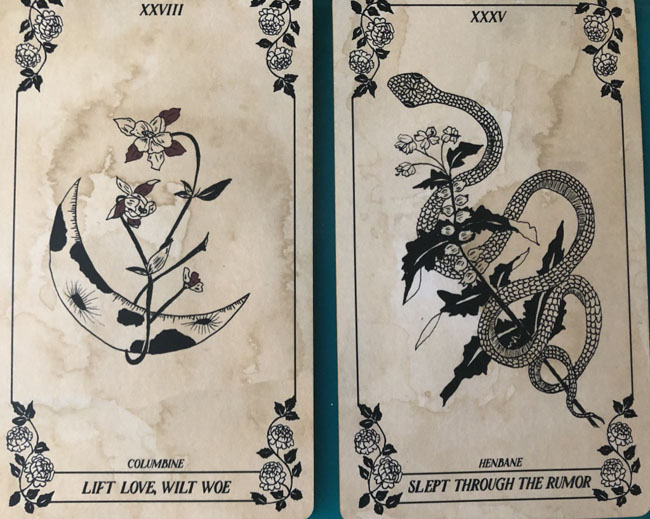 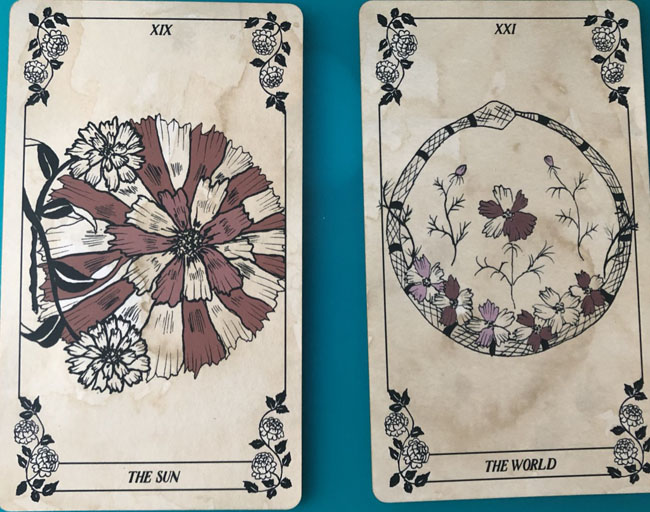 Something else I really like about this deck relates to its magical emphasis on the waning crescent moon.  This is a great Vision-center reboot and balancer for my waxing crescent workings.  I felt the energy shift come into me in a top-down way, and with it a sense of personal balance seeping into me.  And then I went outside in my garden for awhile.  On her website, Nicole encourages taking her decks into the garden as part of their waking and bonding process.  It's too wet here to do that but the ongoing rain is a great boon for the waking garden spaces.

Last night I realized I was going to follow through on the strong hunch that this was to be a dedicated deck for my secret purpose.   The deck was already 'there'.  It knew exactly why and what it was meant for.  I shuffled for a long time coupled with the request for a final message to me personally. 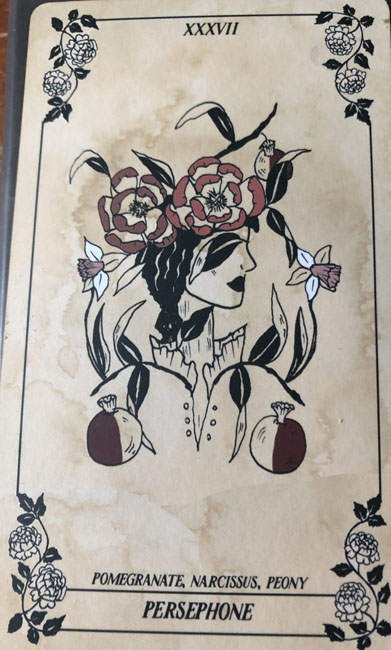 the gentle rain and frequent breaks are a nice mix for getting out and meeting an ever changing garden space in both containers and ground.  I'm overwhelmed because it all seems cosmic and visionary because it IS all that way.

it's all twining back to roots a lot deeper than emotional processing related to cumulative grief reaching this kind of tidal wave release as well as its tenderest imaginable farewell.

for the next while I'm releasing the prompt responsibility through this blog.  I don't know how much other, more personally creative work I'll be doing beyond co-creative happenings in the garden and, hence, will just ask of myself some ongoing posts to my other blog because I do love to share walks in my gardens.

.quite possibly nothing but pictures for the next little while. 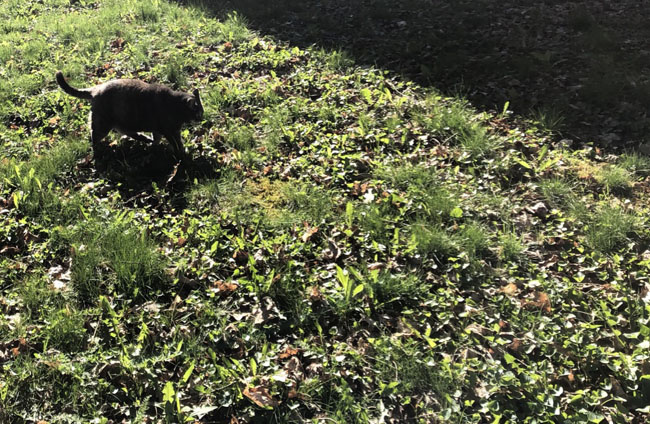 "she hoped I'd use it to buy something she wouldn't approve of" ... says so much ... may memories of happier days in the stories you tell each other continue to be with you and yours

and looking at Nicole Rallis's shop, the Ad Orbita looks like just the deck I've been hoping to find since last year ... thank you for the link

Mo - I am really drawn to her card-garden sympathetic magic cues. Am already envisioning taking that card to a space 'hot spot' in my garden and perhaps telling its story, as well ...

Liz - I think that remark says so much. and she would NOT have approved. But then, when things like that didn't matter any more, she swiftly steered my hand.

My favorite detail of the Ad Orbita deck is that the Emperor card is personified by Mars and a few spiders dance around it.