This slip of paper arrived in my life yesterday.  I thought: this is a perfect mantra-seed for me right now.  Then I thought:  what if it's a perfect prompt for everyone else as well?

Say you had a fertile growing space about seven foot square - all fluffed-up and ready to go.

what strange and mysterious blooms

would you be happy to welcome,

(turning the plot into a cannabis grow is cheating.  and I mean that on a number of different levels.)

There's a natural bridge, energetically, between the lower primary chakras and the heart center.  A similar bridge exists between the heart and the elevated/head chakras of voice, vision, and inter-personal/galactic/spiritual illumination.  The bridge between survival, polarity, volition, and unencumbered open-heart space/brain/mind is super important.  A lot of people try to fly the distance but it seems wise to build the bridge and then use it in order to stay safe and grounded in these strange and rapidly shifting times.  Or maybe you're lucky enough to discover inner awareness of a pre-existing bridge waiting patiently for your specific use right here and now.

Define your bridge between the primaries and your heart with words or some form of visual expression.  JUST AS IT IS.  If this comes out in a way you can't accept move on to idealization/aspiration.  But go for reality first.  just as you are at the heart level.

How short or long is the bridge?  What kind of condition is it in?  Is it something that was erected hurriedly with whatever's on hand or is this a bridge of substance and style combined?

articulate, if only internally, what your heartspace looks like from the "far" side of the bridge closest to your solar center.

Walk across the bridge and look back.  Does the bridge  seem shorter or longer than when you first engaged with this prompt?

What else has changed about the bridge itself or your sense of traveling across it?

get it all down somehow, if that's who you are.  Or focus on a single stray feather's equally single word-meaning wafting towards you from the heartspace itself.

this connective energy center corresponds to the element of air.

hence your inner bridge is supported and surrounded by Heart long before we venture into its true - and truly enormous - territory.

what IS that for you

try, just for now, to think of your heart as a single beating organism representing only yourself as singular life form.  What is your heart center about?  Not who or what it connects you to or who or what you connect to it -

what are YOU at the heart level?

what is however you respond to this part of the prompt about for you?

Is your heartspace the feather or the air it floats through? Realized I needed a Dive check-in post so my personal life/work/review will have to wait.   Earlier today I reconnected with the hand-worked citrine point above.  It used to be double-pointed but at some correlating life-point it shattered and I don't remember how.   Have spent the past two days immersed in rediscovering how my creative flow patterns might be reconfigured following so much emotional release.   This has involved not just my studio time but developing greater flow in the house as well.  Smudging and rearranging things.  Clearing space and raising the octave levels with the coming solstice in mind. 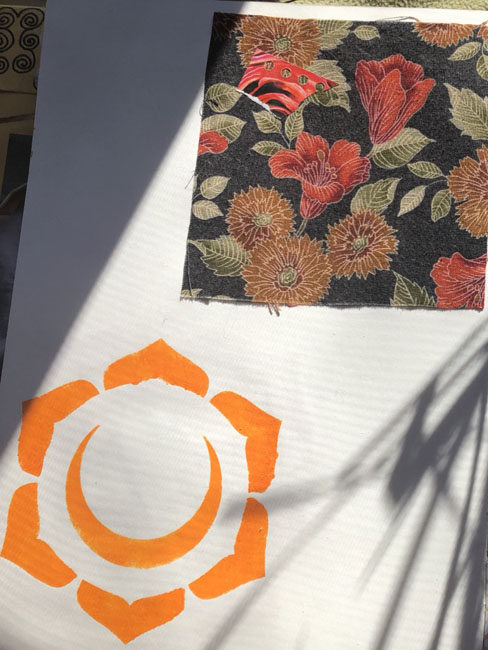 Took all these pics in the room's last fifteen minutes of direct sunlight.  One thing I noticed during the turbulent shadow phase of this experience is how much grounding value I gained from mixing up my creative approach to any given project on my work desk.

have been greatly and great/fully influenced by grace's fabric collages.  today I made the first tentative step to go the other way - to do something I've forbidden myself time and again.  I will easily put fabric to paper but NEVER paper to fabric.  I don't know why I simply know it's forbidden. 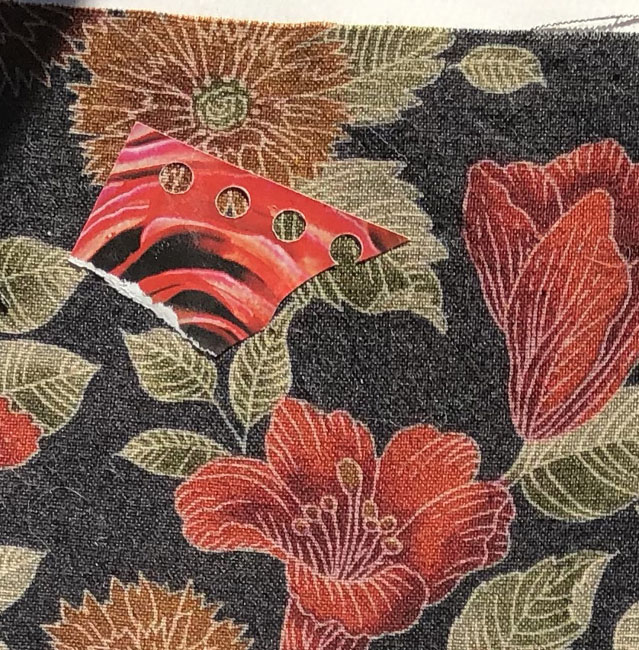 it is glued down and the fabric square is further glued down and since then there has been more paper glued around and so forth.  I will show more in the pretty soon range.  Am giving myself time every day just to stand there at the work deck and fiddle with different arrangements in this particular art journal.  The fact that I'd previously stenciled-in page spreads for the chakras seemed perfectly dovetailed towards getting myself re-involved with this particular project.  It's largely collaged based but not exclusively.

In this dwindling 'short' eclipse portal window I've been flowing in many ways beyond the studio but I notice this is where I made my basic daily choices and set my intentions in alignment with how things might well move forward. 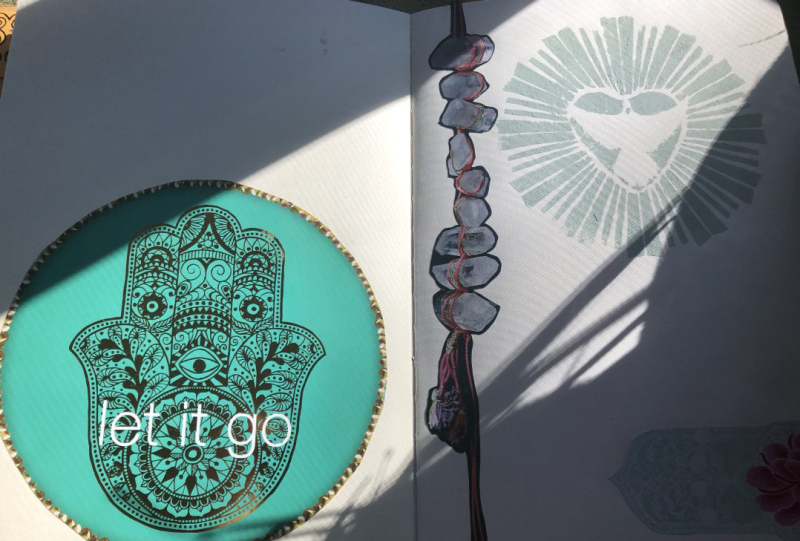 Much of an emotional/sacral backlog nature was released during the first 7-9 days of this month's process.  Several people noticed it and reached out for confirmation and affirmation in the loveliest ways.  I've felt both those things from myself - somehow managing to reconfigure a few pieces of personal mystery here and there. 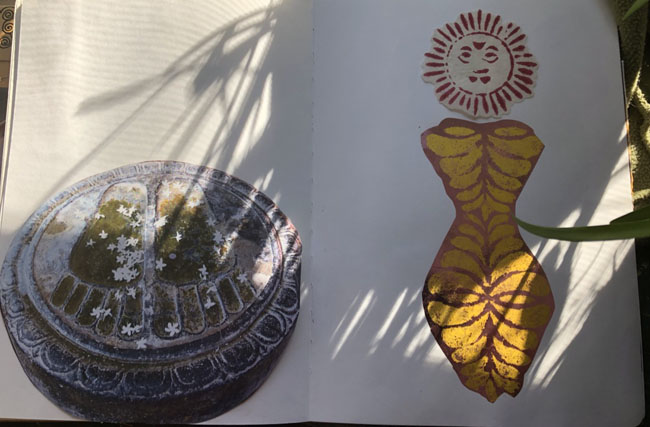 the more uncomfortable the cosmic birth canal became the more I felt myself willing energy to and from the third/solar chakra.  Sometime I had to time-out myself just to get a handle of the ingrained instinct and impulse combined.   Otherwise I just wanted to ground from the lunacy about & beyond, hit my various week-end goals and then move into this new week focused on the principles of flow and intuition.  The latter feels pretty worn out from various ways it wove itself through the first two weeks.   So I've been picking up where I left off very many years ago in the practice  of daily stone work of a sacred nature. 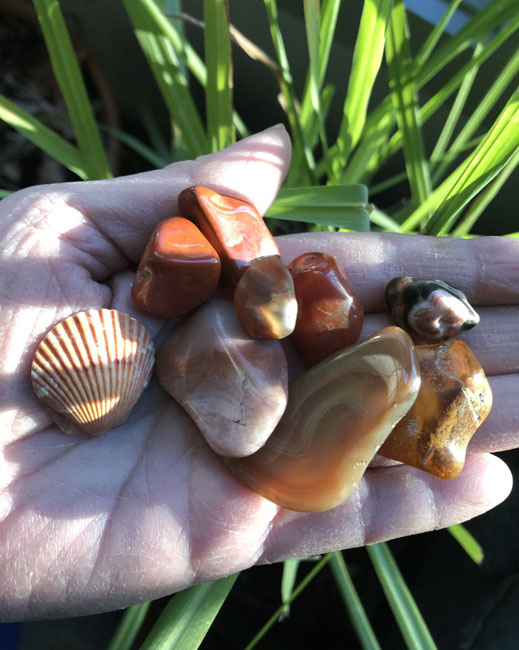 And to that end I went around earlier today and looked for orange-ish stones.  Looking in mixed micro-collections in tea-cups and many different glass or ceramic bowls and larger shells, mostly abalone.  Here in the studio and through the house.  Some are quite old friends.  I thought I'd lost the Thompsonite with its mesmerizing orange eyes.  Also have been yearning for the shell and rough chip of carnelian as well as the polished oval.  Two red jasper chips - a shamanic mentor felt this to be essential for creating sheltered landing strips when actively journeying or meditating on a collective scale.

this stuff comes back to me - so much of it set aside as an excess of accumulating far more intellectualized experience and sense of self when I felt best served to pursue the opposite.  So my stones are scattered everywhere around and part of the ongoing connection to maintaining and rebuilding my red tap root/life force is to retrieve them for contemplating and beyond one energy center at a time. 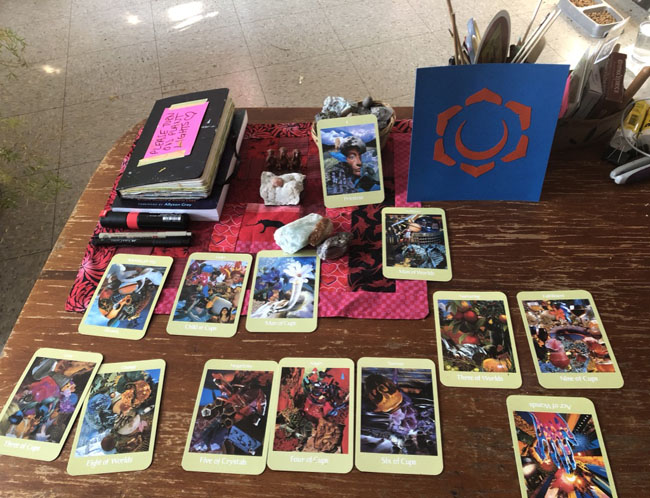 I broke down my fictionland querent/tarot reading into different groupings of how I felt the cards' energies had been showing themselves in the rest of my life.  At the solstice I usually switch over to reading with The Greenwood Tarot.   It's a very different vibe but one that matches well with my need to connect more at a ground/roots/ancient level than something that's cosmic and future-tense driven.  That's what I need from my solar return forward.  The deck itself will undoubtedly enjoy the rest.

also I don't need any more readings for fictionland.  maybe ever at least for this book.  I've broken the full arc of the storyline down in several formats now - thanks in part to what I gained from doing the readings as intently as I have up to this point.  What this means energetically is that I'll relocate where I do the readings and can thus expand my renewed interest in stone/crystal based energy work up here in the studio. 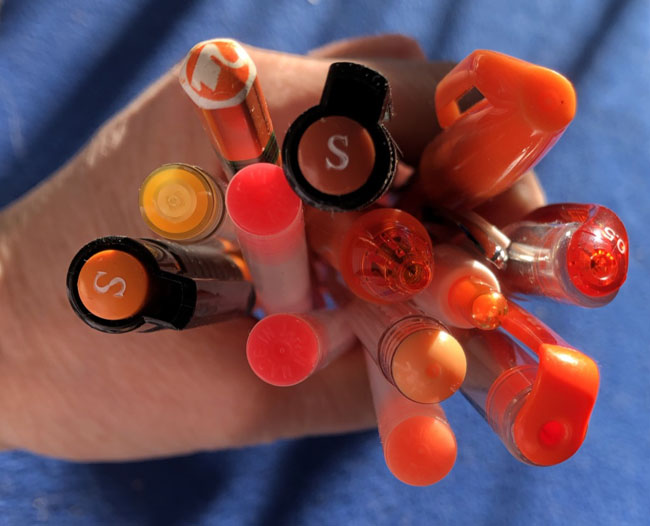 find something orange to write with.

banish as much sacral toxicity as you can one sentence at a time.

it's amazing how the scope and context of stuff that floats loose on its own or we seek to round up because it's time to do no less shifts once the details emerge in such an inherently mood-elevating cheerful color.  Shred the results so there's nothing left but random symbols in the uplifting color.   Glue the strips down in a grid shape.   Now even your discarded emotional detritus finds a useful purpose within forming a containment system.  Fill the resulting sections with images you'd like to hold in this energy center as well as that which you know it already contains of a positive and illuminated nature.  Or just cut shapes from orange-based scraps on hand and glue them into an organized focal re-vision. Give yourself a chance to admire how different this personal check-in looks than however it would have appeared if we'd done this exercise on day two or three.

What creative/primal cave-like wisdom exists for you that didn't exist in the opening bars of this exploration?  How can you expand upon what you're learning about yourself and your own unique conduit of flow with creative inspiration?

Think about the most beautiful orange flower that you know - the one that holds the most light and vibrant orange-ray energy in your experiences and also within your heart and soul.  Make something that speaks of their magic & meaning to you. 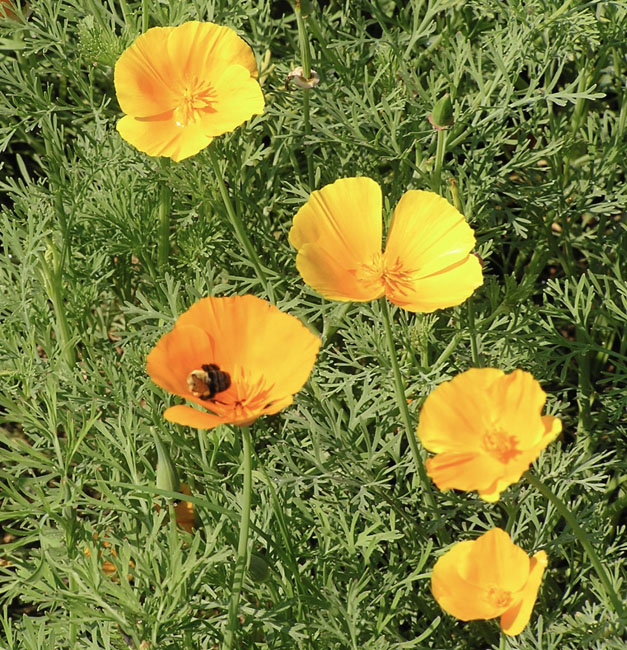