persephone in her many guises 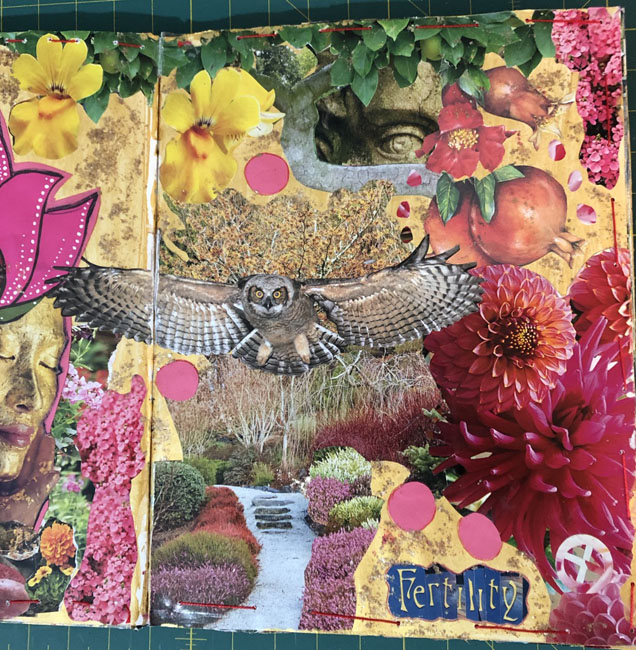 ... and a word narrative about them.  The examples in this post, which I teased the other day, come from my Alchemical Rituals art journal.  You can read more about that project by clicking on the so-named category in the sidebar.  In the month of April our focal expressive technique was collage.  I was determined to collage EVERYTHING including the elemental symbols and the month/theme title bars.

Above is the heart of the month's solar spread.  For its expressive frame we were asked to create our idealized secret garden and how we'd feel to spend time there.  Having just given myself permission to speak freely - I resisted the idea and precisely how it was expressed in the videos but then I did what I'd been doing since the very first video - I actively pushed aside my resistance by diving directly into the part of the lesson that evoked the strongest feeling of no I'm not doing that. And when I look back on it the thing that consistently made this year long endeavor compelling to me was my ongoing and ultimately unwavering commitment to making the class material compelling to myself rather than relying on the instructor to take me to the same level of personalized satisfaction without much effort on my part.  I realize that's not an inspirational model for successfully unleashing a lot of specific creative motivations but it's the way I got something inherently challenging and twice as meaningful fully manifested so that the challenge-meaning ratio was more than sufficiently satisfying to me.

Because I chose to Say No to NO itself - I wound up concluding the assignment, just as it was, held its own weight in the fun and self-introspection departments once I got out of my own way.  I liked where I was going as soon as that happened but things really got cooking for me once I happened upon a large scale statue fragment that fit perfectly into the blank space within a different fragment of espalier examples.  Hades was in the house just like that (I had been worried for almost two months about where I might find a place to "put" him within the journal's over-arching narrative) and shaking the tree even if Persephone - radiant in her full flowering as mythological Queen of the Flowers - is not yet aware. She is simply full of her own ripe agency and its blissful harmony with her array of petal'd subjects.  All the same there He is and there are the fateful pomegranate seeds - some falling as tears from his stony eye.  I consciously softened the seeds' message by adding a magical protective number of fat pink lotus seeds scattered throughout the spread. Various protective words and symbols are drawn upon their undersides. 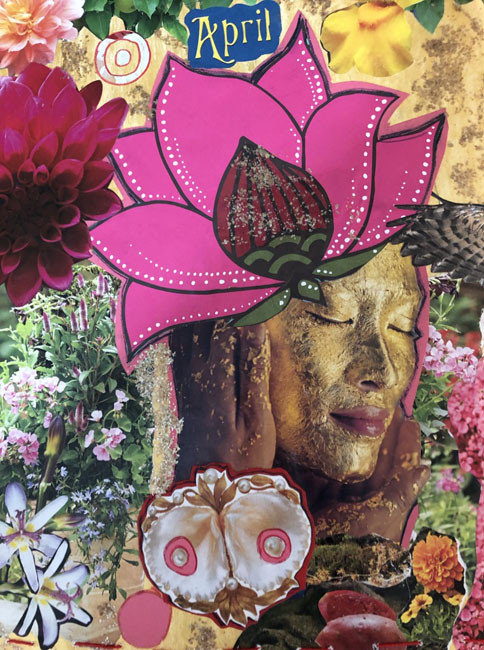 Loved the way a clipped luxurious ornament so strongly resembled the outline shape of a pomegranate.   And just the faint foreshadowing of marigolds that will proliferate on the Lunar Spread. 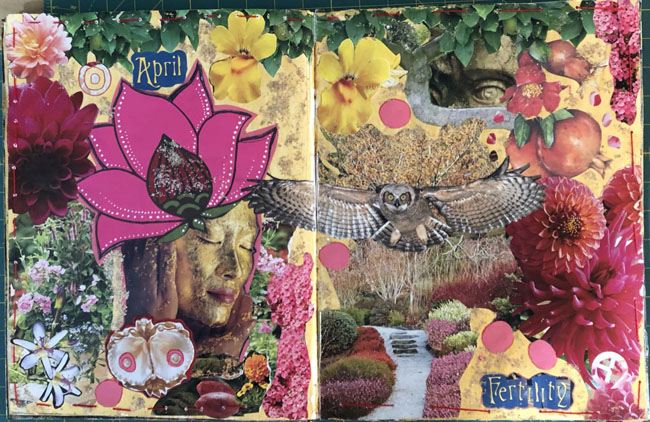 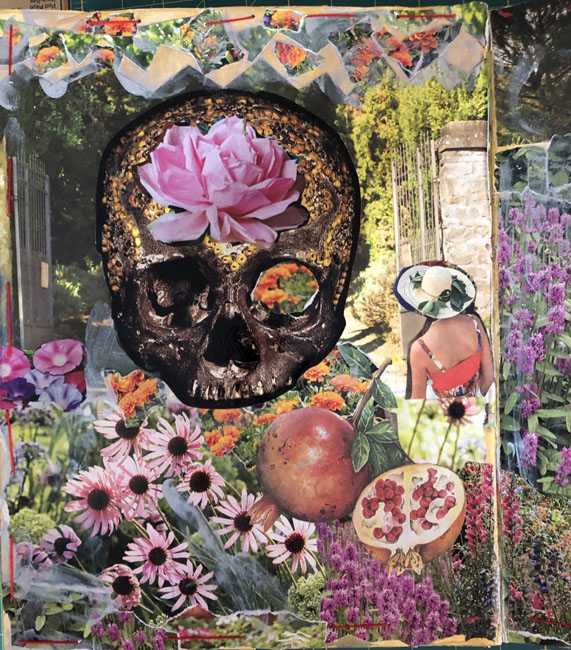 For the lunar spread we were asked to depict what happens when we "neglect" to weed our sacred garden.  For me that would probably be the idealized condition I set out to foster out in our little field so I went with that along the bottom of the entire spread.  The next thing to develop allowed me to address the interest said field attracts.   Once people caught on that I/we were up to something deliberate rather than neglectful nearly everyone involved swung from reproving and DISapproving to naked curiosity and more unsolicited shouted-out questions than I was initially comfortable managing.

This was somewhere in the back of my mind but it leapt right into the foreground when I looked at the underside of scraps left over from the enormous ancient looking gate at an Italian vineyard.  In the original image the open gates frame the proud vinter's family marching out to invite the townspeople into the property for a yearly ceremonial grape stomping event.  The slivers of beaming onlookers wielding all manner of image recording devices served as an accurate model of how I felt as if I'd been under forms of scrutiny so beyond what I was actually experiencing (some of this, too, was an admittedly toxic reaction to my two month Instagram foray) that I couldn't help smiling at the way I was overplaying it.  I decided to stop deciding things and simply play, period. The Invasion of the Looky Loos became the official title of my lunar spread depicting unexpected perils of Failure to Weed. 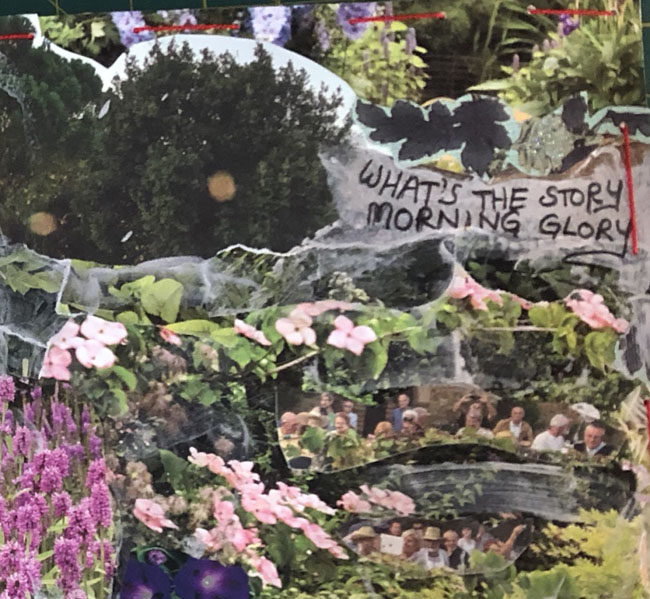 Following this clarification of my expressive intentions I "suddenly" warmed to including an element that had insisted on my attention from the jump I just kept thinking Why?? NO.  WHY!!  But then once I chose to symbolically deal with my angst to the point of feeling actively ready to make fun of it I didn't think no or why anymore.  Especially after I'd I looked up mystical/healing correspondences for both alligators and crocodiles since I wasn't sure which one this was.  Then it made complete and total sense, either way. 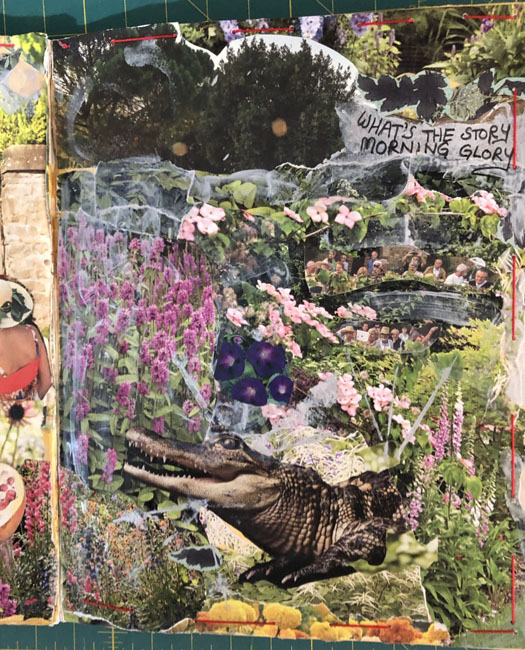 I posted about this specific representation of Persephone at the gates of the Underworld, ready to return to her role as its queen, in a more general introductory post about this particular art journal. 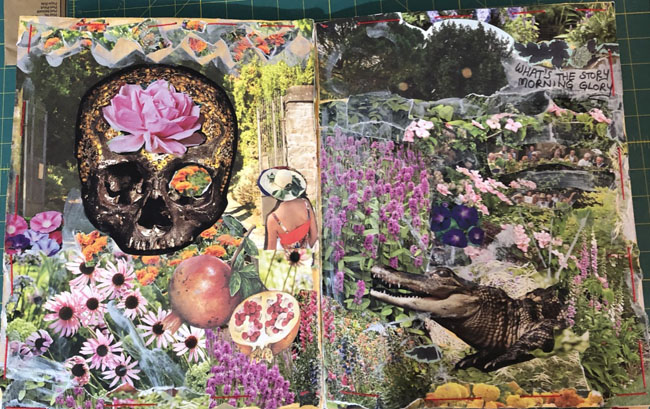 Posted at 11:11 AM in alchemical rituals, archetypal themes, art journal, collage, creative practice & process, figuring out what matters most, fitting pieces together, persephone in her many guises, personal symbology, precious fragments, working together | Permalink | Comments (0)

.2 gluebook inspiration from my link archives 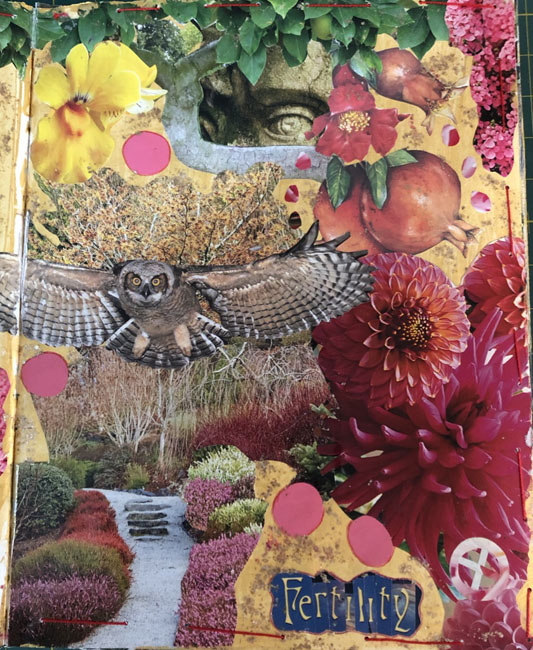 These links swerve all over into the several years old lane but they aren't dated as sources of inspiration worth a few minutes perusal if you're feeling loose-endish and/or curious about the possibilities beyond what I've shared so far.  The two posts numbered with a green letter may be of special value for those who aren't inclined to work in a booklet format.

1.  I Am Rushmore/Karen Isaacson put this post together in 2013 but it never gets old for me.  Her verve and tenacious dedication to showing up for herself creatively inspires me as much now as it did 6 years ago.

2. A Penchant For Paper has an archived collage category with a scope that moves well beyond gluebooking.  It's all inspirational and perhaps of special value for anyone who'd like to work outside a booklet format.  Heather shares a variety of stand-alone collages she created within her one-each-week challenge.  You could use this as inspiration for creating much smaller individual daily collages or larger pieces that you work with over the course of a few days.

pro tip:  To work in a containable series of small collages try creating them within a far larger background you can mark in advance to insure each collage has an adequate amount of space for framing as well as its particular visual statement.  In working this way you'll get to see your various daily efforts in conjunction to each other as a kind of cumulative timeline in a single glance that changes each day you add a new collage.

A fully covered paper bag could be presented in a funky wall poster format or the separate collages might be cut apart and re-gathered in any number of ways:  as smaller curated groupings; in a continuous line/scroll that's been rearranged to maximize narrative and/or aesthetic value; cut apart at an individual level and then recombined as a whole that completes a formerly uncontemplated visual amalgam.  Take a moment to jot down any ideas that jump into your mind as you read my suggestions so they'll be easily accessed at a later time.

3. Gretchen Miller is a certified art therapist and long-time gluebooking advocate. Back in the mid-aughts I first learned the pleasures of "brown bagging" my collage experiments thanks to her tireless encouragement to use/re-use what's on hand first and foremost.  I'm linking to a post that features gluebooks made from various people following her tutorials and other suggestions.

5. Ihanna's bright and bouncy Scandinavian sensibilities remain timelessly inspirational for me.  Maybe you, too!  Once you follow my link "in" to a small portion of her considerable dedication to creating daily collages, you'll see other links to follow from there to get a better feel for the scope of what she's accomplished one card's worth of space at a time.

6.  A particularly vivid example of "pure" collage used to alter an existing book.

7.  Ihanna again - This specific project of hers served as inspiration for my own daily scrap-collage journals that I'll be highlighting in the next countdown inspiration post.

[You can also go to you-tube and search on gluebooks to view both flip-throughs and instructional videos.]

Posted at 11:11 AM in collage, creative practice & process, fitting pieces together, gluebooking, paper madness, persephone in her many guises, working together | Permalink | Comments (2)

bring me the fripperies 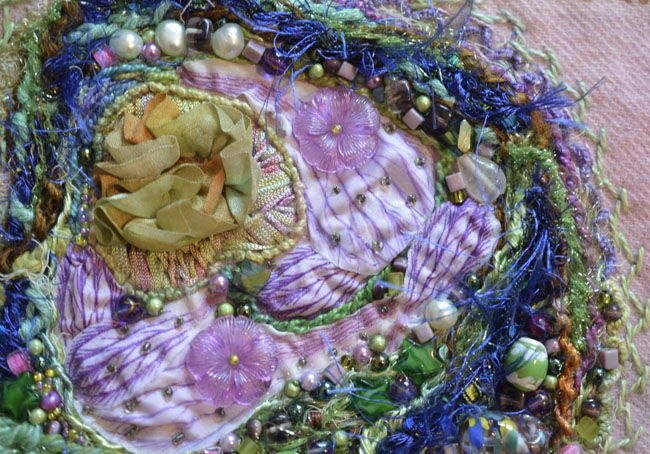 Liz asked to see more of my handwork.  Am currently carrying this small piece (spring nest) roundabout our home looking for a place that feels like a good fit for short term display.  The layer upon layer of glittering and shiny beads and glistening embroidery threads are a conscious homage to my inner Crow spirit. 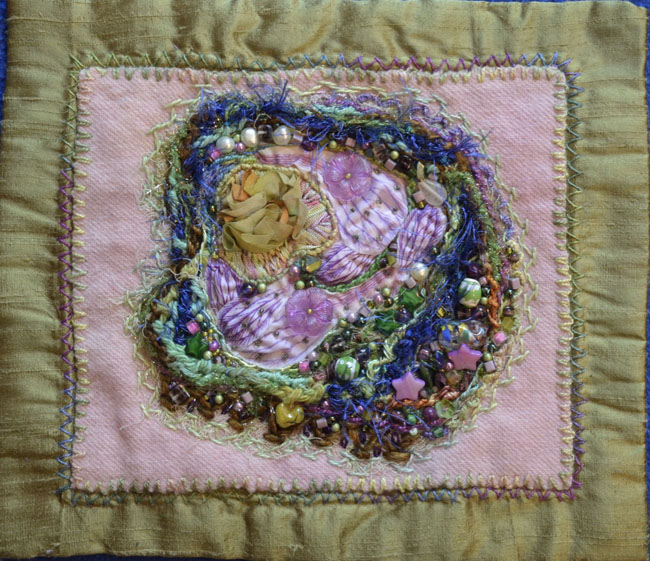 Have at times hung this as a backdrop for a seasonal/spring altar.  But right now I want it to be in my ongoing line of vision while I contemplate how much I want to de-construct this type of layered story-telling so it's more in line with my shifted sensibilities and things we might all create in a collective thrall of expressive call and response with our shifting species-level consciousness. 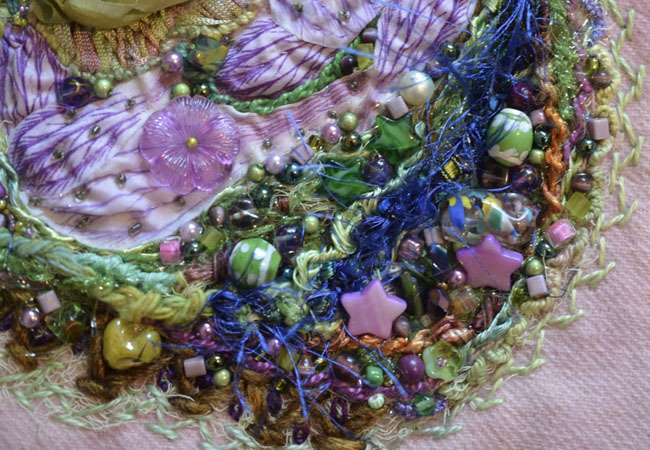 It's very true that pretty is as it does.

Even more true:  sometimes it's just fun on rocket fuel.

Posted at 11:30 AM in art as autobiography, color stories, contemporary embroidery, creative practice & process, figuring out what matters most, persephone in her many guises, precious fragments | Permalink | Comments (4)